Marcy and the Riddle of the Sphinx: Brownstone's Mythical Collection 2 (Paperback) 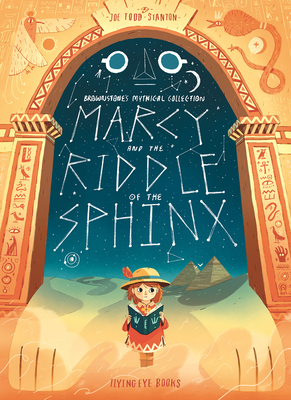 Marcy and the Riddle of the Sphinx: Brownstone's Mythical Collection 2 (Paperback)


In Stock—Click for Locations
Kids will love this exciting excavation of ancient Egyptian myths as they follow along with the clever Marcy on a quest to save her dad from the belly of the sphinx!

Many years have passed since the tale of Arthur and the Golden Rope, and Arthur is now a world-famous adventurer. If only his daughter Marcy shared his enthusiasm for exploration...
Determined to bring out Marcy's adventurous side, Arthur sets off to Egypt to bring back the legendary Book of Thoth. When Arthur doesn't return, Marcy must follow in his footsteps. Can she overcome her fears and rescue her father from the clutches of the great Sphinx?
Joe Todd-Stanton is from Brighton and grew up drawing with his mum. He studied Illustration at University of the West of England, afterwards moving to London where he currently resides. His children’s book, The Secret of Black Rock, won the Waterstones picture book of the year prize in 2018 and since then he has written and illustrated seven books with Flying Eye Books.
NOMINATED FOR A RINGO AWARD IN BEST SINGLE ISSUE AND BEST PRESENTATION IN DESIGN CATEGORIES, WHILE AUTHOR JOE TODD-STANTON HAS BEEN NOMINATED FOR BEST COVER ARTIST AND BEST COLORIST

"The genial, gentle tone of this light exploration of Egyptian mythology is beautifully matched by Todd-Stanton’s gorgeous, jewel-toned artwork.” —Booklist