Amazing Treasures: 100+ Objects and Places That Will Boggle Your Mind (Our Amazing World) (Hardcover) 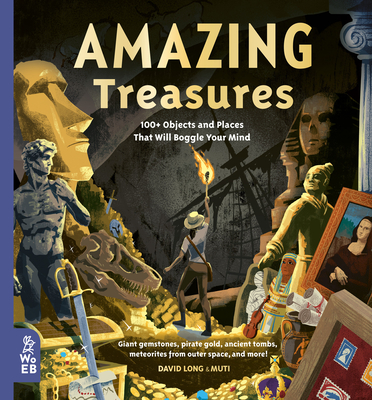 Amazing Treasures: 100+ Objects and Places That Will Boggle Your Mind (Our Amazing World) (Hardcover)

Explore history, culture, geology, and the environment through treasures ancient and modern Discover 100+ of the world's most extraordinary man-made and natural treasures, objects and places.

Giant gemstones, precious artworks, architectural wonders, intriguing ruins, moon rocks, and more Treasures both natural and man-made make an appearance in a tour which stretches across thousands of years and all around the globe. Discover sunken wrecks loaded with pirate gold, the abandoned tombs of the world's most powerful rulers, and even meteorites - treasures from outer space A central foldout map reveals the locations of all the treasures featured in the book, while award-winning author David Long also addresses contemporary topics such as our threatened natural wonders and the ownership of cultural treasures.

Part of the Our Amazing World series, which also includes Amazing Islands. Two more titles are to come in 2021 and 2022: Amazing Rivers and Amazing Animals.

David Long's engaging, imaginative and well-informed books reflect an unquenchable thirst for those events and personalities that illuminate the past. His work has appeared in The Sunday Times, in countless magazines and London's Evening Standard. As a columnist on the Sunday People, he created a popular cartoon strip that ran for several years in the weekend edition of The Times. He writes the kind of stuff he likes to read--for both adults and children. David Long lives in South East England.MUTI is a creative studio founded in 2011, based in Cape Town, South Africa. Their team of illustrators and designers are passionate about producing original and inspiring artwork, from lettering to icons, digital painting to animation.