Queer Between the Covers: Histories of Queer Publishing and Publishing Queer Voices (Paperback) 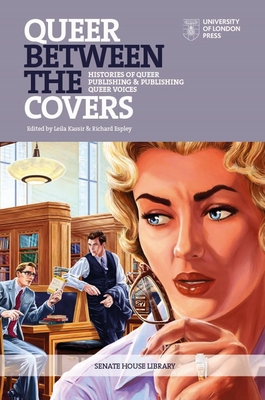 Queer Between the Covers: Histories of Queer Publishing and Publishing Queer Voices (Paperback)

Queer Between the Covers presents a history of radical queer publishing and literature from 1880 to the modern day. Chronicling the gay struggle for acceptance and liberation, the book demonstrates how the fight for representation was often waged between the covers of books in a world where spaces for queer expression were taboo. The chapters provide an array of voices and histories from the famous, Derek Jarman and Oscar Wilde, to the lesser known and underappreciated, such as John Wieners and Valerie Taylor. It includes firsthand accounts of seminal moments in queer history, including the birth of Hazard Press and the Defend Gay’s the Word Bookshop campaign in the 1980s.

Queer Between the Covers demonstrates the importance of the book and how the queer community could be brought together through shared literature. The works discussed show the imaginative and radical ways in which queer texts have fought against censorship and repression and could be used as a political tool for organization and production. This study follows key moments in queer literary history, from the powerful community wide demonstrations for Gay’s the Word during their battle with the British government, to the mapping of Chicago’s queer spaces within Valerie Taylor’s pulp novels, or the anonymous but likely shared authorship of the nineteenth century queer text Teleny. Queer publishing also often involved fascinating creative tactics for beating the censor, from the act of self-publishing to anonymous authorship as part of a so-called “cloaked resistance.” Collage and repurposing found images and texts were key practices for many queer publishers and authors, from Derek Jarman to the artworks created by the Hazard Press.

This is a fascinating and topical book on publishing history for those interested in how queer people throughout modernity have used literature as an important forum for self-expression and self-actualization when spaces and sites for queer expression were outlawed. ﻿

Leila Kassir is a subject librarian specializing in English, Caribbean, and Latin American literature based at Senate House Library, University of London.