A Revolution on Canvas: The Rise of Women Artists in Britain and France, 1760-1830 (Hardcover) 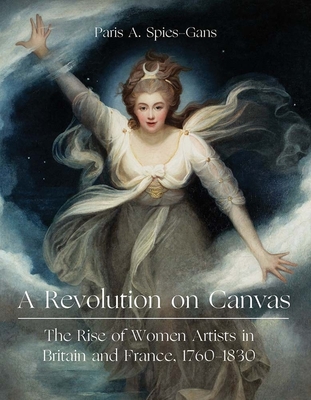 A Revolution on Canvas: The Rise of Women Artists in Britain and France, 1760-1830 (Hardcover)


On Our Shelves Now at:
The first collective, critical historical study of women artists in Britain and France during the Revolutionary era

In the late eighteenth and early nineteenth centuries, hundreds of women in London and Paris became professional artists, exhibiting and selling their work in unprecedented numbers. Many rose to the top of their nations’ artistic spheres and earned substantial incomes from their work, regularly navigating institutional inequalities expressly designed to exclude members of their sex. In the first collective, critical history of women artists in Britain and France during the Revolutionary era, Paris Spies-Gans explores how they engaged with and influenced the mainstream cultural currents of their societies at pivotal moments of revolutionary change.

Through an interdisciplinary analysis of the experiences of these narrative painters, portraitists, sculptors, and draughtswomen, this book challenges longstanding assumptions about women in the history of art. Importantly, it demonstrates that women built profitable artistic careers by creating works in nearly every genre practiced by men, in similar proportions and to aesthetic acclaim. It also reveals that hundreds of women studied with male artists, and even learned to draw from the nude. Where traditional histories have left a void, this generously illustrated book illuminates a lively world of artistic production.

Featuring an extensive range of these artists’ paintings, drawings, sculptures, and writings, alongside contemporary prints, satires, and works by their male peers, A Revolution on Canvas transforms our understanding of the opportunities and identities of women artists of the past.

“This publication, which might be one of the most anticipated art history books of the year, draws heavily on new research and statistical analysis on the subject of women artists during the late eighteenth and early nineteenth centuries.”—Sothebys.com