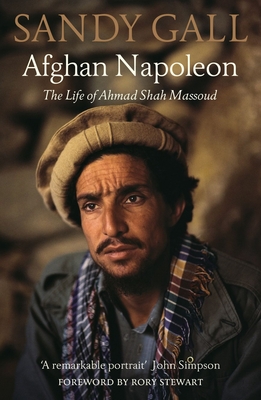 
On Our Shelves Now at:
The first biography in a decade of Afghan resistance leader Ahmad Shah Massoud.

When the Soviets invaded Afghanistan in 1979, the forces of resistance were disparate. Many groups were caught up in fighting each other and competing for Western arms. The exception were those commanded by Ahmad Shah Massoud, the military strategist and political operator who solidified the resistance and undermined the Russian occupation, leading resistance members to a series of defensive victories.

Sandy Gall followed Massoud during Soviet incursions and reported on the war in Afghanistan, and he draws on this first-hand experience in his biography of this charismatic guerrilla commander. Afghan Napoleon includes excerpts from the surviving volumes of Massoud’s prolific diaries—many translated into English for the first time—which detail crucial moments in his personal life and during his time in the resistance. Born into a liberalizing Afghanistan in the 1960s, Massoud ardently opposed communism, and he rose to prominence by coordinating the defense of the Panjsher Valley against Soviet offensives. Despite being under-equipped and outnumbered, he orchestrated a series of victories over the Russians. Massoud’s assassination in 2001, just two days before the attack on the Twin Towers, is believed to have been ordered by Osama bin Laden. Despite the ultimate frustration of Massoud’s attempts to build political consensus, he is recognized today as a national hero.
Sandy Gall is a journalist, author, documentary producer, and newscaster. He has reported from conflict zones across the world and is the recipient of many awards for his journalism and documentary work.

Rory Stewart was the UK Secretary of State for International Development and is currently a senior fellow at the Jackson Institute for Global Affairs at Yale University.
"With the West’s own military venture in Afghanistan now unravelling, Gall’s book serves two timely purposes. One is to retell Massoud’s legendary campaign against the Soviets, which saw him dubbed 'the Afghan who won the Cold War'. The other, though, is to ask whether more Western support for him in the 1990s could have led to a better Afghanistan."
— Colin Freeman

"This book is essential reading for those who want an insider's understanding of the Afghan civil war."
— Literary Review

"Gall’s knowledge of the jihad is encyclopaedic. He was the first well-known journalist to make the dangerous journey into occupied Afghanistan and bring the human cost of this terrible war to our TV screens. To produce such a book at the age of 93 deserves admiration. . . .A strength of Gall’s book is its detailed discussion of Pakistan’s malign interference in Afghanistan, where the Taliban are their proxy force."
— Matthew Leeming

"A new book drawing on... years of reporting from Afghanistan and Massoud’s personal diaries."
— Diplomat

"Massoud’s diaries and Gall’s lovingly woven storytelling are a valuable addition to our understanding of Afghanistan."
— History Today

"Sandy Gall’s Afghan Napoleon tells the long-neglected story of Ahmad Shah Massoud, a figure who has loomed large in both the public imaginations of Afghanistan and its neighboring country of Tajikistan. . . . Gall’s book is fascinating for its ability to draw on never before seen sources such as Massoud’s personal diaries and his own experiences working as a correspondent in Afghanistan. The personal insights about Massoud from Gall’s own interactions with him, words from Massoud’s own diaries, and interviews with friends and family paint an intimate picture of Massoud’s family life and character. Afghan Napoleon does a good job showcasing Massoud’s personal life and inner thoughts in ways that few biographies are able to manage."
— Oxford Middle East Review


“Afghan Napoleon: The Life of Ahmad Shah Massoud by British journalist Sandy Gall, dedicated to Afghanistan’s illustrious statesman, is a remarkable undertaking that delves into the multifaceted intricacies of a nation devastated by war and ruined by its adverse geography.”
— Eurasia Review

"Gall’s book raises the question: What if Massoud had lived? Would Massoud have been able to consolidate a post-Taliban Afghanistan? Would a moderate Afghanistan have shone through to the Muslim world rather than bin Laden’s siren’s call of Islamism? Gall convincingly suggests all were possible."
— Middle East Quarterly

"Afghan Napoleon offers an overdue portrait of one of the most remarkable figures of the twentieth century. Napoleon tried to conquer the world; Massoud by contrast fought the world-scale Soviet empire to a stand still on behalf of his people from a tiny valley in Afghanistan.  In this book we see, not just the daily nuts and bolts of his military genius but catch glimpses of the social graces and the warmth that made this man so beloved among his followers."
— Tamim Ansary, author of The Invention of Yesterday: A 50,000-Year History of Human Culture, Conflict, and Connection

“The unputdownable story of an authentic Afghan hero by one of the greatest chroniclers of modern Afghanistan’s travails, and occasional triumphs.”
— Sir Sherard Cowper-Coles, former British Ambassador to Afghanistan, and British Special Representative for Afghanistan and Pakistan

"I can think of no one better than the legendary foreign correspondent Sandy Gall to tell the compelling story of Ahmad Shah Massoud’s extraordinary life and death. . . . Gall weaves analysis, first-hand reporting and primary sources into a brilliant and important book."
— Jeremy Bowen

"Ahmad Shah Massoud was one of the greatest military commanders of the 20th century and was instrumental in forcing the Soviets to retreat from Afghanistan in 1989. Yet, he is now barely known in the West. That will surely change as a result of Gall’s authoritative, beautifully written and deeply reported biography of Massoud."
— Peter Bergen, author of The Rise and Fall of Osama bin Laden

"This is a remarkable book, both a coruscating memoir by Gall and a revealing insight into a guerrilla leader—one whose reputation ranks with the icons of revolutionary insurgency and whose thinking is here revealed in his own words."
— Hew Strachan

"When conceived several years ago, the book was planned as the largely admiring record of one of the great might-have-beens of history, and also–obliquely–as the last testament of the gallant Sandy Gall himself, who will be 94 in October. It remains both of those things, but the events of the past fortnight also give an urgency to the story."
— Charles Moore