One Body: A Retrospective (Paperback) 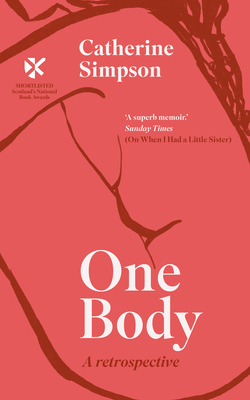 One Body: A Retrospective (Paperback)

In this searing, frank and funny memoir, Catherine Simpson describes what it's been like to live in her woman's body, and to reach the realisation that all that time she'd spent trying to change her body to conform - often to unattainable standards - could be seen from a completely different perspective.

By the time she reached her fifties, Catherine Simpson and her body had gone through a lot together--from period pain and early menopause to shaming and harassment. But there had been success, joy, love, and laughter too: far more freedoms than her mother had, a fulfilling family life and career, and even the promise of further gains for her daughters.

So when a cancer diagnosis upends her life, Catherine is forced to reflect on her body, then and now. From growing up on a farm where veterinarians were more common than doctors, and where illness was "a nuisance," she finds herself faced with the nuisance of a lifetime.

One Body is the demystifying, relatable, often hilarious and sometimes hair-raising story of how Catherine navigates her treatment and takes stock of the emotions and reflections it provokes. And how she comes to appreciate the skin she is in--to be grateful for her body and all that it does and is.

Catherine Simpson is a novelist, journalist, poet, and short story writer. Her memoir When I Had a Little Sister was published by Fourth Estate in 2019 to great acclaim. In 2013 she received a Scottish Book Trust New Writers Award. Her work has been published in various anthologies and magazines, published online and broadcast on BBC Radio. Born on an English dairy farm, she is now based in Edinburgh, Scotland.