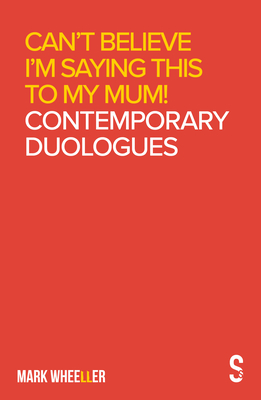 
Not On Our Shelves—Ships in 1-5 Days
(This book cannot be returned.)
A varied collection of 30 contemporary duologues from Mark Wheeller's plays. Compiled at a time when social distancing is a consideration, these duologues all lend themselves to Zoom/Social Distance friendly performances. It includes duologues from: Too Much Punch For Judy Hard To Swallow Missing Dan Nolan I Love You, Mum - I Promise I Won't Die Game Over ... and many more of Mark's plays... and musicals. It also includes a previously unpublished self-contained short Sibling Saviours. All these duologues are suitable for young people to use for classroom or audition use. Despite many being ostensibly for adult performers they are all tried and tested for young people to use with amazing results. There has never before been a collection of exclusively Mark Wheeller duologues.
Mark Wheeller began writing whilst a student at Marlwood Comprehensive School, Bristol. After teaching drama for thirty-six years he retired in July 2015 to concentrate on writing and delivering Drama/Theatre workshops to students and teachers across the world. Mark is one of the most-performed playwrights in Britain. Too Much Punch For Judy has been performed over 6,000 times and Chicken nearly 6,000. Missing Dan Nolan and Hard to Swallow are both set texts for the GSCE Drama 9-1 exams. His work has been a staple part of the Drama curriculum both in the UK and abroad for the past three decades. Professional productions of Hard to Swallow, I Love You Mum, I Promise I Won't Die and Chicken regularly tour schools and many of Mark's works are available on DVD, with digital formats forthcoming in late 2020. His study guides include Drama Schemes, The Story Behind Too Much Punch For Judy, Drama Club & Hard to Swallow - Easy to Digest. He has three children and lives just outside the New Forest, with his wife Rachael, and Labrador, Dusty.