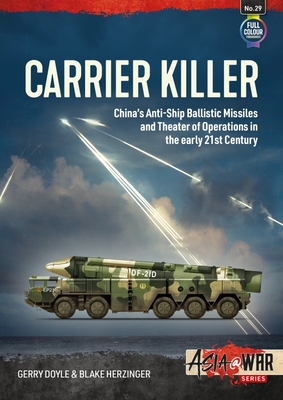 
Not On Our Shelves—Ships in 1-5 Days
The idea of an anti-ship ballistic missile has taken root in China's military planning. The country is not only building more of its first version of such a weapon, the DF-21D, but has developed an anti-ship warhead for another such missile, the more-numerous DF-26, billed as having a 2,500-mile range -- more than enough to hit Guam from several hundred miles inland in China. In theory, that puts any naval adversary at risk long before it is in Chinese waters, let alone within striking distance of China's coastline.

That puts US carrier strike groups -- a linchpin of US power projection, able to hit any corner of the world at short notice with overwhelming force -- in a situation they have never before faced. For years, US war planners took for granted that American naval power could operate unimpeded anywhere on Earth and deliver strikes with relative impunity. If a missile can sweep that option off the board, it changes the balance of power not just in Asia, but across the globe.

It is a collision of two world-shaking forces: China, the only country to build large numbers of ballistic missiles to threaten enemy fleets, and the United States, the only power on Earth with more than a single nuclear-powered aircraft carrier. Neither situation seems likely to change in the near future, putting both countries on what may be a collision course of doctrine and technology.

The only way an outside observer will know for certain how well the DF-21D and its successors work is if they are used operationally, in the face of the US Navy's growing array of countermeasures and anti-missile systems. If that happens, the world is either plunging into a catastrophic war, or several chapters deep into one.

That makes the development, deployment and threat posed by the DF-21D and China's other ASBMs crucial to study. The outcome of the next great power conflict might hinge upon whether this type of missile truly is a Carrier Killer.

Carrier Killer is illustrated with over 70 photographs, many in full color, and specially commissioned color artworks illustrating the US and PRC ships, aircraft and missile systems in this potential conflict zone.