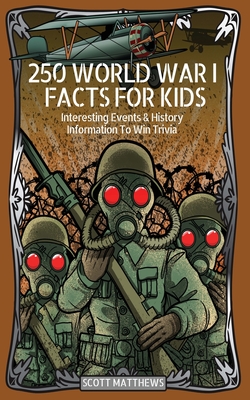 The second world war is common knowledge by this point, but far too many of us overlook the so-called "war to end all wars". If you look beneath the surface, there are tons of hilarious facts and gritty details just waiting to be discovered.

From the military trying to train seagulls to ships being made out of concrete, this brilliant fact book explores WWI like never before, delving into the trenches and showcasing the military masterminds, weird and wacky weapons, and unconventional battle strategies that marked this turbulent time in history.

You'll discover why soldiers lived in constant fear of gas attacks, the very first tanks ever made, and a whole host of other crazy and little-known facts that you were never taught in History class.

A birthday present or holiday gift for curious kids, grandkids, nieces and nephews, this fact book is guaranteed to provide hours and hours of fun So grab your your gas mask and your rifle and get ready to dive into this world-changing war - who knows, you might just learn something new along the way

What're you waiting for? Knowledge is power Scroll up and click the 'Buy Now' button now to discover the wacky world of WWI facts