Eternal Treblinka: Our Treatment of Animals and the Holocaust (Paperback) 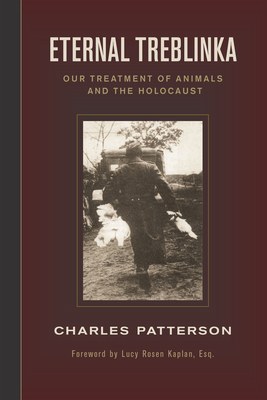 Eternal Treblinka: Our Treatment of Animals and the Holocaust (Paperback)


Not On Our Shelves—Ships in 1-5 Days
This book explores the similar attitudes and methods behind modern society's treatment of animals and the way humans have often treated each other, most notably during the Holocaust. The book's epigraph and title are from "The Letter Writer," a story by the Yiddish writer and Nobel Laureate Isaac Bashevis Singer: "In relation to them, all people are Nazis; for the animals it is an eternal Treblinka." The first part of the book (Chapter 1-2) describes the emergence of human beings as the master species and their domination over the rest of the inhabitants of the earth. The second part (Chapters 3-5) examines the industrialization of slaughter (of both animals and humans) that took place in modern times. The last part of the book (Chapters 6-8) profiles Jewish and German animal advocates on both sides of the Holocaust, including Isaac Bashevis Singer himself.