The Ultimate Droodles Compendium: The Absurdly Complete Collection of All the Classic Zany Creations (Paperback) 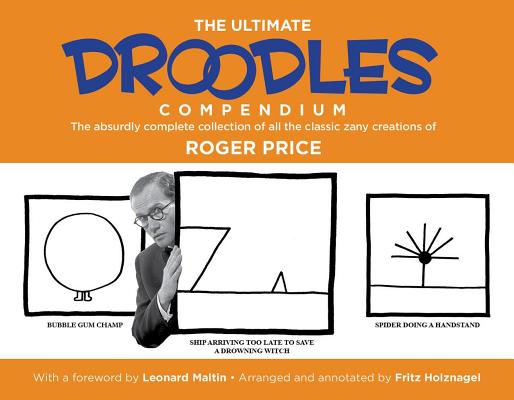 The Ultimate Droodles Compendium: The Absurdly Complete Collection of All the Classic Zany Creations (Paperback)


Not On Our Shelves—Ships in 1-5 Days
Before the inspired nonsense of Monty Python, David Letterman and the Far Side, there were Droodles. With a few squiggles in a simple square, these clever drawings created absurd scenes like Ship arriving too late to save a drowning witch (used by Frank Zappa as an album cover), Octopus signaling for a left turn and Clam with buck teeth. And they were all the creation of one brilliant and unpredictable man: Roger Price.


At the height of their popularity in the mid-1950s, fans enjoyed the Droodles TV show, a Droodles daily newspaper column, Droodles magazine features, Droodles cocktail napkins, even Droodles in ads for Lucky Strike cigarettes. Like hula hoops, drive-in movies and UFOs, Droodles were one of the biggest fads of the 1950s.


Now Droodles make their triumphant return to delight a new generation that can use some laughs. The Ultimate Droodles Compendium includes every one of Roger Price's 352 most famous Droodles in delightful new full-quality reproductions, with Price's inspired text and quirky footnotes. There's more: a Roger Price/Droodles reminiscence by beloved media critic Leonard Maltin, a full history of Roger Price and Droodles by Emmy-winning writer Fritz Holznagel, and comments from comedy legend Carl Reiner, Boing Boing's Mark Frauenfelder and Carla Sinclair, and others.