Elfquest: The Art of the Story (Hardcover) 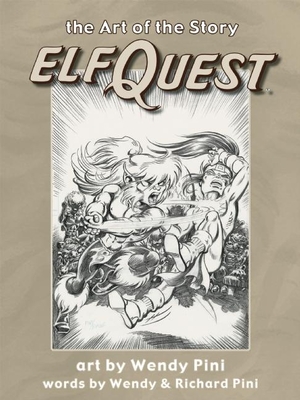 Elfquest: The Art of the Story (Hardcover)


Not On Our Shelves—Ships in 1-5 Days
Elfquest: The Art of the Story handpicks a selection of Wendy and Richard Pini's favorite Elfquest tales, scanned directly from the original art. These self-contained pieces are some of the finest Elfquest stories ever told. Every unlettered art page is paired with its as-published twin and in-depth running commentary by the Pinis, so readers can easily follow each tale and see for themselves the creative process that is the "art of the story." Wendy Pini's wide range of visual storytelling and technical skills are showcased through graceful inks showcased in The Heart's Way as well as vivid mixed-media used in Little Patch, Rogue's Curse, The Jury and Wolfwood. The book concludes with a fan favorite: "Rogue's Challenge," the all-out action story of Cutter and Rayek's most dynamic confrontation, from Elfquest: Hidden Years #9 1/2. It features full pencils by Wendy displayed side-by-side with finished inks by John Byrne, who supplies a new afterword to share his process of working with the Pinis. Each story also includes an in-depth running commentary by Wendy and Richard Pini themselves, taken from all-new interviews.

Wendy Pini is the co-creator, writer, artist and colorist for the long-running fantasy graphic novel series Elfquest. She has also written and painted two Beauty and the Beast graphic novels, as well as a critically acclaimed 400-page dark, futuristic re-imagining of Poe's The Masque of the Red Death. She lives in Los Angeles. Richard Pini is the co-creator, sometimes-writer, editor and publisher for the long-running fantasy graphic novel series Elfquest. A graduate of MIT in astronomy as well as planetarium writer, lecturer, and teacher, he has also contributed numerous articles to magazines. He lives in Poughkeepsie, NY.