Would You Rather...? Lol: Over 300 Intensely Intriguing Questions to Ask Your Friends!! (Paperback) 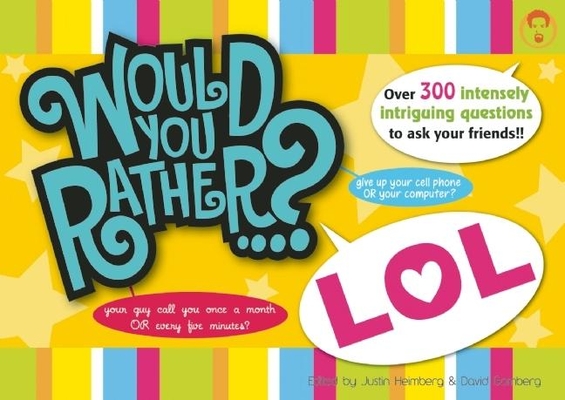 Would You Rather...? Lol: Over 300 Intensely Intriguing Questions to Ask Your Friends!! (Paperback)


Special Order—Subject to Availability
Gather your besties and find out what they're really thinking in this all-new collection of questions designed to let readers know how their friends and feel about boys, music, school, television, fashion, and more Would you rather . . . guest-star playing a talentless nerd on Glee or a dead body on The Vampire Diaries? Would you rather . . . have an iPad with permanently attached Dora the Explorer skin or a DS that could only play educational games? Would you rather . . . dress like Katy Perry or Lady Gaga?
Editors Justin Heimberg and David Gomberg have written and/or edited their creation, the hit Would You Rather...? series since the original Melrose Place ruled the airwaves.