Expanding Darshan: Manjari Sharma, to See and Be Seen (Hardcover) 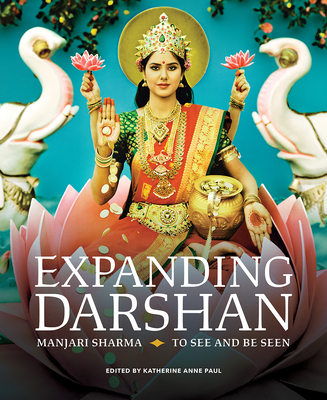 Expanding Darshan: Manjari Sharma, to See and Be Seen (Hardcover)

Bringing together the work of a rising star, global contemporary photographer Manjari Sharma, with the diverse historic collections of the Birmingham Museum of Art, this beautifully illustrated volume serves as an accessible primer to the arts of Hinduism by introducing nine of the most significant deities of the Hindu pantheon and their contemporary relevance in art and faith. These deities are Ganesha, Lakshmi, Brahma, Saraswati, Vishnu, Hanuman, Shiva, Durga and Kali. Sharma's photographic series of these nine deities is titled Darshan. This book serves as a gateway to the ancient concept of darshan--a profound encounter of seeing and being seen by the divine.

The temporal and regional expansiveness of the Indic world is illuminated through works of art not only from India but also from Cambodia, Indonesia, Nepal, and Thailand in conversation with Sharma's series. Furthermore, the volume details the multi-layered relationships between art and religions that promoted these deities even beyond Hinduism to be revered in Buddhist, Jain, Muslim and Sikh contexts. Additionally, dynamic exchanges between South and Southeast Asia are showcased. Illuminated map-timelines place the works featured in this catalogue in both physical and temporal spaces. Annual festivals that celebrate select deities are highlighted, demonstrating the depth and strength of the cultural foundation that supported the growth of Sharma's work.

A conversation between the artist Sharma and renowned curator Bridget Bray of Asia Society Texas Center provides greater insight into the contemporary thoughts, challenges, and opportunities Sharma generated through her Darshan series. Angela May contextualizes other forms of contemporary artistic practice in Angkor, Cambodia, that responds to the UNESCO world heritage site. Finally, select case studies offer insights into institutional transparency, connoisseurship, and provenance for specific works featured in the volume.

Distributed on behalf of the Birmingham Museum of Art.