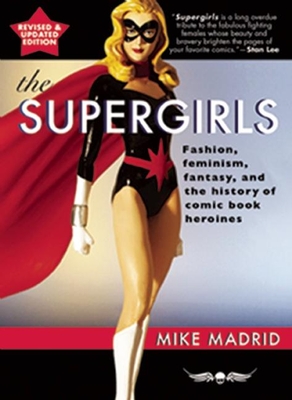 THE history of the American superheroine. The Supergirls, a cultural history of comic book heroines, asks whether their world of fantasy is that different from our own. Are the stories of Wonder Woman's search for an identity or Batwoman's battle for equality also an alternative saga of modern American women? NPR says ". . . as it delivers its clear-eyed critique of the way mainstream superhero comics have alternatively eroticized or deified female characters, The Supergirls gleefully celebrates the medium itself, in all its goofy, glorious excess."

Mike Madrid is the author of Divas, Dames & Daredevils: Lost Heroines of Golden Age Comics, Vixens, Vamps & Vipers: Lost Villainesses of Golden Age Comics, and the original The Supergirls: Fashion, Feminism, Fantasy, and the History of Comic Book Heroines, an NPR "Best Book To Share With Your Friends" and American Library Association Amelia Bloomer Project Notable Book. A San Francisco native and lifelong fan of comic books and popular culture, Madrid also appears in the documentary Wonder Women! The Untold Story of American Superheroines and is the illustrator of two of The History of Arcadia books: Lily the Silent and The Lizard Princess.