The Bottom of the Jar (Paperback) 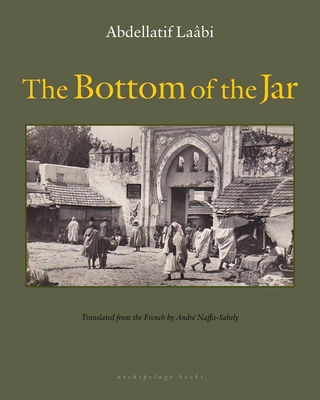 The Bottom of the Jar (Paperback)


Special Order—Subject to Availability
The Bottom of the Jar is the journey of a boy finding his footing in the heart of Fez during the 1950s, as Morocco began freeing itself from the grip of the French colonial occupation. The narrator vividly recalls his first encounters with the ebullient city, family dramas, and the joys and turbulence of his childhood. He recalls a renegade, hashish-loving uncle, who at nightfall transforms into a beloved Homer, his salt-of-the-earth mother's impassioned pleas to a Divine ear, and his father's enduring generosity. Told in the spirit of a late-night ramble among friends where hilarious anecdotes and poignant recollections flow in equal parts, Laâbi's autobiographical novel offers us a generous glimpse into the formative experiences of a great poet, whose integrity and commitment to social justice earned him an eight-and-a-half year prison sentence during Morocco's "year of lead" in The 1970s.
Poet, novelist, playwright, translator, and political activist, Abdellatif Laâbi was born in Fez, Morocco in 1942. He was also the founder of Souffles, an important literary review that was banned in Morocco in 1972. Laâbi received the Prix Robert Ganzo de Poésie in 2008, the Prix Goncourt de la Poésie for his Oeuvres complètes in 2009, and the Académie Française's Grand Prix de la Francophonie in 2011. Also available in English are his debut collection of poetry The Rule of Barbarism, the memoir Rue de Retour, and The World's Embrace: Selected Poems.

André Naffis-Sahely's translations include Laâbi's The Rule of Barbarism (Pirogue Poets Series), and Rachid Boujedra's The Barbary Figs and The Funerals (Arabia Books). His translation of Émile Zola's L'argent is forthcoming from Penguin Classics. He lives in London.
Fire. Germination. Birth. Blood. All these themes are burnished and boned image by image until they echo through Abdellatif's book.... Abdellatif Laâbi, as you will see, is a member of the same cell as Dostoevsky, Hikmet, Soyinka, Cervantes... —Breyten Breytenbach, for Rue du Retour

By the winner of the Goncourt Prize for Poetry The Bottom of the Jar is surely the novel I wrote with the greatest joy. —Abdellatif Laâbi

At once classic (in tone) and modern (in form), The Bottom of the Jar is imbued with humor and a sensibility that gives it a certain magic. The result: two hundred fifty pages of pure pleasure. —La Vie Economique

A master of his art. —Le Nouvel Observateur

A valuable book: inventive and philosophically amusing, it assures us that despite dark times, human virtue still shines in Maghreb with a clarity that is unquestionably brightest in the old city of Fez. —J.M.G. Le Clézio, winner of the Nobel Prize

The Bottom of the Jar is an authentic and beautiful bildungsroman in which life and political struggle take place in one space, with the demand for Moroccan independence joining the need for personal emancipation in a sublime way. —Quotidien National

Created with gentleness and with fury, with words that thrill the soul, that cry out with the urge to live, with hope and with suffering —Jeune Afrique

The great power and subtlety of the work lies in the fine balance it strikes between that Peter Pan–like sensitivity, vulnerability and imagination, and the brutality of the real world, history and politics. —The Daily Star (Lebanon)

Laâbi's poetic voice consistently raises a song of possibilities above the dirge of cruelty. —Victor Reinking