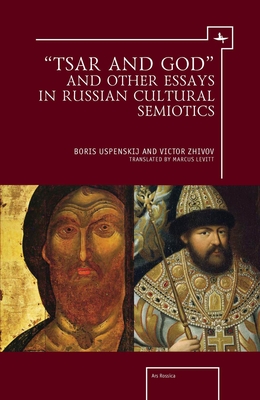 
Not On Our Shelves—Ships in 1-5 Days
Featuring a number of pioneering essays by the internationally known Russian cultural historians Boris Uspenskij and Victor Zhivov, this collection includes a number of essays appearing in English for the fi rst time. Focusing on several of the most interesting and problematic aspects of Russia's cultural development, these essaysexamine the survival and the reconceptualization of the past in later cultural systems and some of the key transformations of Russian cultural consciousness. The essays in this collection contain some important examples of Russian cultural semiotics and remain indispensable contributions to the history of Russian civilization.
Boris Uspenskij (PhD Moscow University) is a professor at the Russian State University for the Humanities and professor emeritus of the Oriental University of Naples (Istituto Universitario Orientale). His research in general linguistics defined his interest in semiotics with the special focus on the visual arts, especially the study of icon-painting. He has published numerous books and articles, including The Semiotics of Russian Culture (1984, with Yu. Lotman); The History of the Russian Literary Language (XI--XVII centuries) (1987, in Russian); Semiotik der Geschichte (1991); Storia della lingua letteraria russa (1993); Linguistica, semiotica, storia della cultura (1996); Semiotics of Art (1995, in Russian); Tsar and Patriarch (1998, in Russian); "In regem unxit " Unzione al trono e semantica dei titoli del sovrano (2001); Cross and Circle: From the History of the Christian Symbolism (2006, in Russian); Ego loquens: Language and Communicational Space (2007, in Russian); Prospettiva divina e prospettiva umana: La pala di van Eyck a Gand (2010).