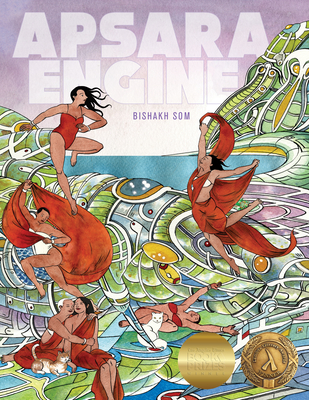 Winner of the 2021 Lambda Literary Award for LGBTQ Comics

Finalist for the 2021 Ferro-Grumley Literary Award for LGBTQ Fiction

The eight delightfully eerie stories in Apsara Engine are a subtle intervention into everyday reality. A woman drowns herself in a past affair, a tourist chases another guest into an unforeseen past, and a nonbinary academic researches postcolonial cartography. Imagining diverse futures and rewriting old mythologies, these comics delve into strange architectures, fetishism, and heartbreak.

Painted in rich, sepia-toned watercolors, Apsara Engine is Bishakh Som's highly anticipated debut work of fiction. Showcasing a series of fraught, darkly humorous, and seemingly alien worlds--which ring all too familiar--Som captures the weight of twenty-first-century life as we hurl ourselves forward into the unknown.

An astonishing collection of stories that expand and pulse into galaxy-sized moments of strangeness and wonder. --Kelly Link, author of Get in Trouble

"Som has created a collection of short stories that dance between genres and identities, moving from incisive descriptions of modern social realities to poetic ruminations on the future. This anthology by an up-and-coming comics superstar, which centers queer and trans South Asian narratives, is precisely what we need right now." --Them

Bishakh Som is an artist, illustrator, and writer whose work has appeared in the New Yorker, BuzzFeed, the Boston Review, and the Brooklyn Rail, among others. Her books include Apsara Engine, Spellbound: A Graphic Memoir, and The Prefab Bathroom: An Architectural History, and she was also a contributor to We're Still Here: An All-Trans Comics Anthology. Some is currently based in Brooklyn, New York.