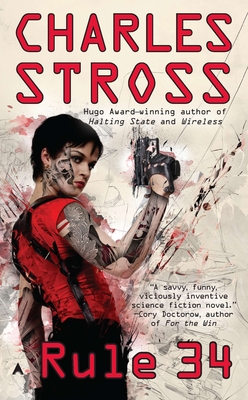 This is book number 2 in the A Halting State Novel series.

Three ex-cons have been murdered in Germany, Italy, and Scotland. The only things they had in common were arrests for spamming—and a taste for unorthodox entertainment. As the first officer on the scene of the most recent death, Liz finds herself sucked into an international investigation that isn’t so much asking who the killer is, but what—and if she doesn't find the answer soon, the homicides could go viral.
Charles Stross was born in Leeds, England in 1964. He holds degrees in pharmacy and computer science, and has worked in a variety of jobs including pharmacist, technical author, software engineer, and freelance journalist. He is now a full-time writer.
“The act of creation seems to come easily to Charles Stross…[He] is peerless at dreaming up devices that could conceivably exist in 6, 60 or 600 years’ time.” --The New York Times

“One of the most intelligently and philosophically detailed near futures ever conceived. Dazzling, chilling, and brilliant.” --Kirkus Reviews (Starred Review)