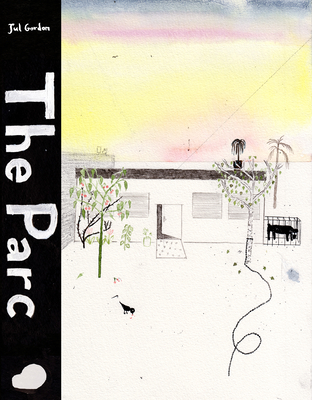 The Park is a theatrical panoply of intertwined narratives of quiet and violent desperation, culminating in a kidnapping, an exploding human, and a brawl involving small creatures and the four remaining members of a set of quintuplets.

Inspired by a German comic opera and drawn from scale models built by the author, The Park captures the reader with an accessible presentation that belies its many nuances and details, which may only reveal themselves after a second or third pass. Opening with a geographic layout of the park and a snapshot of the inhabitants of each residence, Gordon's efficient set up allows her to immediately plunge into contextualized scenes of daily life. Arresting and curious illustrations expose the nature of each character's existence and their relationships with others, punctuated by spare dialog. Violence and despair are portrayed casually, with humor and irreverence, but the contrast between the gravity of the content of the panels and the levity in the way they are drawn creates a friction that underscores the societal critique. It gets messy, and there are consequences. And yet, there is hope, resilience, caring, beauty, and art.

Jul Gordon has been praised for her narrative cohesiveness and fluidity and her offbeat, corrosive humor. The Park's dichotomous nature may be best described by these two review excerpts:

"While there are scenes that sear themselves into your genetic make-up, like a guy in a wheelchair shooting his guns into an empty swimming pool, there emerges a burning, all-engulfing anger from Gordon's vivid comics language." - Oliver Ristau, The Comics Journal

"A great touching picture story, by Jul Gordon, excitingly told, wondrously comically drawn, about life as it really is: With the ancestors, the weather, the vermin and love." - Anke Feuchtenberger, Comic drawer