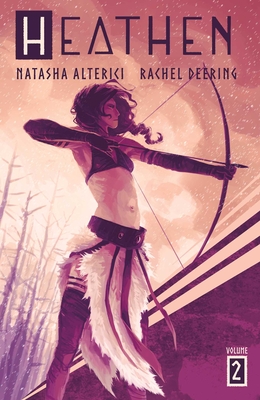 
Not On Our Shelves—Ships in 1-5 Days
WOMAN. WARRIOR. VIKING. OUTCAST. THE GODS MUST PAY.

Aydis the banished viking sets sail on the open sea to reach Heimdall, the magical entrance to the land of the gods. She’ll need the help of a crew of worldly pirate women and man-eating mermaids to survive the dangerous journey. Back on land, the cursed Valkyrie Brynhild and the goddess of love Freyja are chipping away at Odin’s power, testing the god-king’s patience and tempting his wrath.

Collects issues #5 to #8 of the twelve issue series.

Aydis is a viking, a warrior, an outcast, and a self-proclaimed heathen. Aydis is friend to the talking horse Saga, rescuer of the immortal Valkyrie Brynhild, and battler of demons and fantastic monsters. Aydis is a woman. Born into a time of warfare, suffering, and subjugation of women, she is on a mission to end the oppressive reign of the god-king Odin.

Collects issues #1 to #4 of the twelve issue series.