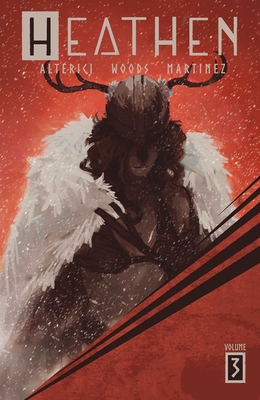 
Not On Our Shelves—Ships in 1-5 Days
Aydis' mortal feet have brought her to the godlands. But her mortal deeds have invited Odin's wrath. His armies stand poised to destroy her home. With the help of friends new and old, she must face the god-king before it's too late.

After a perilous journey across the northern sea, Aydis has reached the godlands. With the help of sneaky friends and skeptical trolls, she’ll finally confront the corrupt god-king Odin face-to-face. Meanwhile, his army marches toward her home, where her friends and family prepare for a final battle.

Collects issues #9 to #12 of the twelve issue series.
Natasha Alterici is a writer and artist living in Tulsa, OK who has been working as a freelance artist for over ten years. Works include Heathen (Vault Comics), Dinosaur Project, Gotham Academy: Yearbook, Grayson Annual, The Lez Film Review, Mixed Signals, Lovers and Other Strangers, Transcience, and a number of others. When not drawing, she enjoys watching cooking shows with her wife and their two cats, Cheshire and Louise.