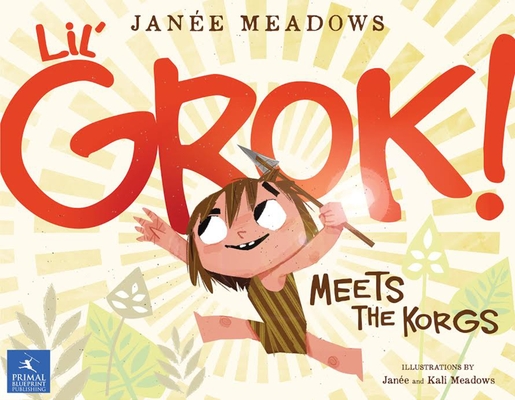 Lil' Grok Meets The Korgs is an epic tale of adventure based on Mark Sisson's best-seller, The Primal Blueprint. Lil' Grok is a cave boy digging life in the stone ageuntil a saber-toothed tiger gives chase. Grok descends into a magical cave, and is propelled thousands of years into the future!  Luckily, he's scooped up by an archeologist named Mr. Korg who's digging for artifacts in the middle of a bustling city park. He takes Lil' Grok home to meet the ultra-modern, hashtagging, pizza-loving, dessert-scarfing Korg family. Unfortunately, Lil' Grok doesn't seem to fit in at the Korgs, or anywhere else in modern life. He squats to eat with his hands right on the table! He doesn't wear shoeshe crawls like a bearjumps like a catand starts food fights at school! And what kind of kid is allergic to pizza?!  But when a tiger escapes from the zoo, it's Lil' Grok who's the hero, and the Korgs have to adapt or get dropped. Grok shows the Korgs, and the entire town, that being a nimble, jungle-wise cave boy has its perks. Kick off your shoes, relax into a squat, and introduce your favorite young reader into the world of Lil' Grok and the Korgs. This hilarious journey might just end primally ever after-and deliver some important life lessons along the way. A perfect gift for hunters and gatherers of all ages, Lil' Grok Meets The Korgs shows us how to trek through the modern world in our ancestor's footsteps so that we can lead happier, healthier, lives. Designed for hunter-gatherers ages 4-8.

Master illustrator and graphic designer Kali Meadows worked together with her sister, author Janée Meadows, on the illustrations for Lil' Grok Meets the Korgs.