The Children of the Ghetto: My Name is Adam (Paperback) 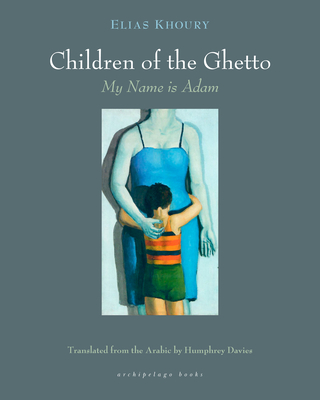 The Children of the Ghetto: My Name is Adam (Paperback)


Special Order—Subject to Availability
A moving story about Palestine's 1948 Exodus by the Arab world's finest living novelist. First in a trilogy.

Long exiled in New York, Palestinian ex-pat Adam Dannoun thought he knew himself. But an encounter with Blind Mahmoud, a father figure from his childhood, changes everything. As he investigates exactly what occurred in 1948 in Lydda, the city of his birth, he gathers stories that speak to his people's bravery, ingenuity, and resolve in the face of unimaginable hardship.
Elias Khoury is the author of 13 novels, 4 volumes of literary criticism, and 3 plays. For 12 years he was a Prof. of Middle Eastern and Arabic Studies at New York University and has also taught at Columbia University. He won the Palestine Prize for Gate of the Sun, also named a Best Book of the Year by Le Monde Diplomatique, The Christian Science Monitor, and The San Francisco Chronicle, and a Notable Book by The New York Times. As Though She Were Sleeping won France's inaugural Arabic Novel Prize. In 2016, he was awarded the Mahmoud Darwish Award for Creativity. About the translator: Humphrey Davies is a translator of Arabic fiction, historical, and classical texts. His translations include Elias Khoury's Yalo, Naguid Mahfouz's Thebes at War and Midaqq Alley, Alla Al-Aswany's The Yacoubian Building and Friendly Fire, Hamdy el-Gazzar's Black Magic, Mohamed Mustagab's Tales of Dayrut, and the four-volume 19th century Arabic experimental novel, Leg over Leg, by Faris Al-Shidyaq. A two-time winner of the Banipal Prize, he is also the recipient of the English PEN Writers In Translation Award. Davies lives in Cairo.
"Khoury engages his own oeuvre in playful metafictional ways, along with real and invented scholarly texts, and larger Palestinian and Israeli literary histories to which this book is a timely and essential contribution. He rejects didacticism — “My story isn’t an attempt to prove something” — pirouetting between saying and unsaying, creating a mass of competing meanings from which Adam’s tormented psychology emerges. If Khoury makes any argument, however, it is that the expression of an “unadorned truth” is impossible, since all language is symbolic and metaphoric; words are weighed down by their histories... Khoury gives us a vivid glimpse of the unspeakable." — New York Times Book Review

"Khoury insists that it is impossible to separate the stories of Palestinian and Jewish victimization, but his efforts to accompany the silence of the victims with their stories provide a generous and expansive terrain to think of histories of violence, of their remnants in the present, and of the complexities of survival." — World Literature Today

"For Khoury, who was born in 1948 and whose life has been marked by almost continuous war, My Name is Adam marks the achievement of a long-held wish, dating back to his work as a member of Fatah in the late sixties and early seventies, to write a great epic about the Nakba ... (Khoury) listen(s) to the way that Palestinians have lived with the history of catastrophe, not by creating alternative narratives, but by cultivating silence and secrecy, shoring up fragments against their ruin." — Asymptote

"There has been powerful fiction about Palestinians and by Palestinians, but few have held to the light the myths, tales and rumors of both Israel and the Arabs with such discerning compassion. In Humphrey Davies' sparely poetic translation, Gate of the Sun is an imposingly rich and realistic novel, a genuine masterwork." -- New York Times Book Review

"Khoury is one of the most innovative novelists in the Arab world." -- Washington Post Book World

"We need the voice of Elias Khoury--detailed, exquisite, humane--more than ever. Read him." -- Naomi Shihab Nye