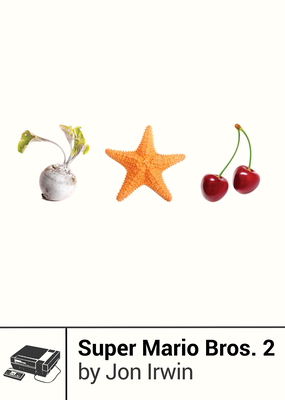 
Not On Our Shelves—Ships in 1-5 Days
In perhaps the most famous switcheroo in all of game history, the Japanese version of Super Mario Bros. 2 was declared too hard by Nintendo of America and replaced with a Mario-ified port of the Famicom hit, Yume K j  Doki Doki Panic. The new game (dubbed Super Mario USA in Japan) was a huge success for its four playable characters, improved graphics, immersive levels, and catchy music, and eventually became the 3rd bestselling game for the NES.

And yet. Because of its strange new villains, its wild gameplay, and its mysterious touches, SMB2 has for years been regarded as the Odd Mario Out, even as it has seen popular updates on the Super NES and Game Boy Advance. Irwin's Mario is not a simple retelling of a 25-year-old story, but instead an examination of the game with fresh eyes: both as a product of its time and as a welcome change from the larger Super Mario franchise. Along the way he searches for clues, pulling up a few vegetables of his own. What he finds is not at all what he expected.