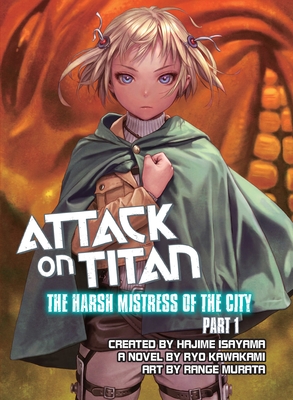 
Special Order—Subject to Availability
Another YA fantasy title based off the best-selling manga Attack on Titan. With Wall Maria breeched, communities within the Quinta district have been cut off from each other creating famine and chaos. A young field commander named Rita is tasked with a mission to reconnect transit across the massive district while putting her troops and residence right in the vanguard as Titans descend on her town.
Born in 1976, Ryo Kawakami is a novelist and game author. A graduate of the Kobe University School of Business, Kawakami initially broke into the media scene by working with Japanese role-playing game maker The SNE Group. After writing numerous light novels and RPG game replay books, Kawakami would take on a broader audience by writing the script to the award winning game - CATHERINE by Atlus (Best Video Game Story 2011 - IGN Magazine/PlayStation3 Game of the Year - Onion AV Club). The Harsh Mistress of the City is his most recent novel and first in English.