My Real Name Is Hanna (Paperback) 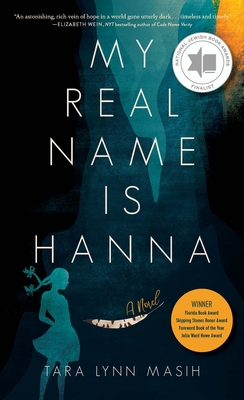 My Real Name Is Hanna (Paperback)


Not On Our Shelves—Ships in 1-5 Days
1941, Hitler's army crosses into Soviet-occupied Ukraine in a secret mission titled "Operation Barbarossa". A young Jewish girl, Hanna Slivka, is fourteen when German soldiers arrive in her small village of Kwasova. Until their arrival, Hanna has split her time between playing with her younger siblings, sharing drawings with the sweet, shy Leon Stadnick, and assisting her neighbor, Mrs. Petrovich, with her annual dyeing and selling of psyanky, decorative eggs. But now, she, Leon, and their families are forced into hiding, first in the woods outside of their town and then into caverns beneath it. They battle sickness and starvation, and the local peasants who join the Nazis in hunting Jews through the ravaged countryside, but at no time are they more tested than when Hanna's father—briefly above ground to scavenge for food—goes missing, and suddenly, it's on Hanna to find him, and to find a way to keep her mother, brother, and sister alive. This novel is inspired by the true story of Esther Stermer and her family, who survived underground for 511 days. Less than 5% of the Jewish population in Ukraine survived these Holocaust "Actions".
Tara Lynn Masih is editor of two ForeWord Books of the Year, The Rose Metal Press Field Guide to Writing Flash Fiction and The Chalk Circle: Intercultural Prizewinning Essays. She is author of the critically acclaimed short story collection, Where the Dog Star Never Glows. In addition to other collections, her flash fiction has been anthologized in Flashed: Sudden Stories in Comics and Prose; Nothing Short of 100; and W. W. Norton's forthcoming New Microfiction. Awards for her work include a Skipping Stones Honor Award (for The Chalk Circle), the Lou P. Bunce Creative Writing Award, The Ledge Magazine's Fiction Award, Wigleaf Top 50 recognition, a finalist fiction grant from the Massachusetts Cultural Council, and Pushcart Prize, Best New American Voices, and Best of the Web nominations. She was recently honored with a Neville Award Citation for exemplary stories that deal with climate change, and her essay "Be Prepared to Evacuate" was translated into a dance performance by Dance Box Theater. She is Founding Series Editor for The Best Small Fictions annual anthology and splits her time between Massachusetts and Florida. www.taramasih.com
National Jewish Book Award Finalist
The Julia Ward Howe Award for Young Readers
Florida Book Award and Foreword INDIES Award—Gold Medals
Skipping Stones Honor Award


"This debut historical novel is a brilliantly rendered memorial to survivors of the Holocaust. . . . A strong choice for young adult shelves." —School Library Journal

"With the continuing surfeit of WW II fiction, it is refreshing to find an original voice that delivers such a harrowing, yet inspiring message for young readers. [A] highly readable, affecting novel. —Historical Novels Review

"Poetic and vivid. To strong effect, the loveliness of Hanna's thoughts counters the ever-present dangers of what she faces." —Foreword Reviews, Editor's Pick

"The story . . . is told effectively and movingly. . . . This is a well written and highly recommended selection." —Jewish Book Council

"Of the recent books on the Holocaust, this short volume stands out . . . and makes it a worthwhile addition for all libraries" —Association of Jewish Libraries, Spotlight Review

"This novel is a boundary-crosser. Although it is a work of fiction, it is well researched and could pass as a memoir or a work of Holocaust history." —New York Jewish Week (JOFA Journal)