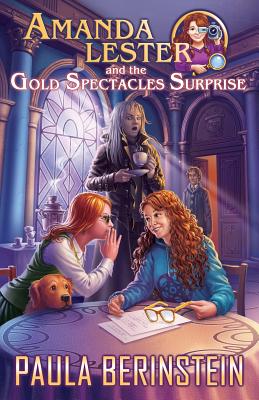 This is book number 6 in the Amanda Lester series.

What is Professor Scribbish hiding?

Amanda and her friends have known about the mysterious Detective's Bible for some time. But what they never dreamed was that old Lovelace Earful, Legatum's founder and the author of the precious book, had much more up his sleeve than that.

Now a strange pair of gold-rimmed spectacles he designed has fallen into the hands of the Moriarty brothers. But the glasses have been stolen, and it falls to Amanda to figure out where they are and get them back before . . . what? All she knows is that they're powerful and the bad guys want them. But in order to acquire them she'll have to penetrate a fortress where a new enemy is waiting--one who has already targeted Scapulus Holmes and is coming for her next.

What she doesn't know is that sometimes you should leave well enough alone.