Alone Across the Arctic: One Woman's Epic Journey by Dog Team (Hardcover) 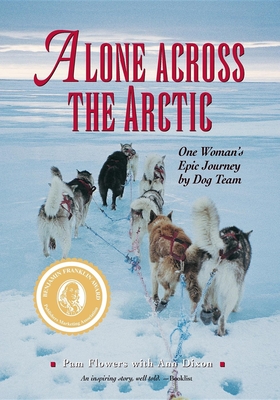 Alone Across the Arctic: One Woman's Epic Journey by Dog Team (Hardcover)

By Pam Flowers, Ann Dixon (With)


Not On Our Shelves—Ships in 1-5 Days
"Pam spurned conventional rewards, entrusted her dream to eight powerful huskies, and set out alone to cross the Arctic. . . . a most extraordinary journey." --Sir Ranulph Fiennes, renowned adventurer Eight sled dogs and one woman set out from Barrow, Alaska, to mush 2,500 miles. Alone Across the Artic chronicles this astounding expedition. For an entire year, Pam Flowers and her dogs made this epic journey across North America arctic coast. The first woman to make this trip solo, Pam endures and deals with intense blizzards, melting pack ice, and a polar bear. Yet in the midst of such danger, Pam also relishes the time alone with her beloved team. Their survival---her survival---hinges on that mutual trust and love.
Pam Flowers is the fourteenth recipient of the Gold Medal from the Society of Woman Geographers, following in the footsteps of Amelia Earhart, Margaret Mead, and Jane Goodall. Named an Outsider of the Year by OUTSIDE MAGAZINE, she has participated in nine Arctic expeditions and completed a thru-hike of the Appalachian Trail. Pam is the author of ORDINARY DOGS, EXTRAORDINARY FRIENDSHIPS; ELLIE'S LONG WALK; HUG A HUSKY; DOUGGIE and, along with Ann Dixon, is the coauthor of ALONE ACROSS THE ARCTIC: ONE WOMAN'S EPIC JOURNEY BY DOG TEAM and BIG-ENOUGH ANNA. Pam has spoken to more than 700,000 students at over 1,200 schools and has spoken at the Smithsonian, the St. Louis Science Center, and hundreds of public libraries. Ann Dixon is the author of eight picture books for children and one nonfiction title for young adults, as well as poems, essays, and nonfiction for adults. She lives in Homer, Alaska, where she works as the director of the Homer Public Library. Her children's books have garnered numerous awards, including the National Outdoor Book Award, Ben Franklin Award, and Patricia Gallagher Award. She and her husband have two grown daughters. anndixon.net