Saddle, Sword, and Gun: A Biography of Nathan Bedford Forrest For Teens (Hardcover) 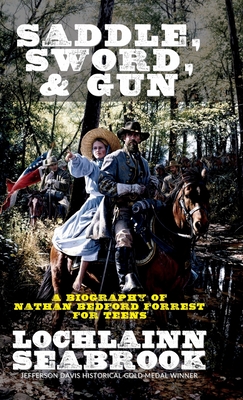 Saddle, Sword, and Gun: A Biography of Nathan Bedford Forrest For Teens (Hardcover)

Your son or daughter will ride along with Forrest, getting a firsthand look at his childhood in Tennessee, his teens in Mississippi, his marriage and children, his multimillion dollar businesses, the start of the American "Civil War," his enrollment in the Confederate army, and his rise to fame as a daring and successful Rebel officer.

They will thrill to the dramatic descriptions of General Forrest's exploits on and off the battlefield as he and his courageous cavalry (which included sixty-four black Confederate soldiers) fought their way across the South defending hearth, home, honor, and the constitutional right of self-government. In the process they will discover why the General's men loved and respected him, why the Southern people looked up to him as their "Spiritual Comforter," and why he freed his slaves years before Lincoln issued his fake and illegal Emancipation Proclamation.

After Lincoln's War they will follow Forrest as he rebuilt his life from scratch, and helped the South regain her political power and dignity during the Yankees' cruel and vindictive "Reconstruction" period. Finally they will learn how the great Confederate chieftain lived out his last years campaigning for black civil rights while working to heal the physical and emotional wounds left by the War for Southern Independence. Along the way they will be taught the truth about Forrest and Southern slavery and about Lincoln's War on the Constitution and the American people, a truth that has been hidden for a century and a half by uneducated enemies of the South.

Parents, you will enjoy reading this heavily illustrated compact little book as well, for it contains hundreds of important historical facts that neither you or your children were ever taught in school. Col. Seabrook's sixth book (of 12) on Forrest, Saddle, Sword, and Gun is a significant work that will change hearts and minds regarding one of the most inspirational, gallant, colorful, and riveting figures in world history, a man who to this day is loved by millions of people of all races around the globe: famed Tennessean Nathan Bedford Forrest Available in paperback and hardcover.

Neo-Victorian scholar Lochlainn Seabrook, whose literary works range from astronomy to zoology, is one of the most prolific and popular writer-historians in the world today. A descendant of the families of Alexander H. Stephens, John S. Mosby, Edmund W. Rucker, and William Giles Harding, he is known by literary critics as the "new Shelby Foote" and the "American Robert Graves," and by his fans as the "Voice of the Traditional South." The Sons of Confederate Veterans member is a Kentucky Colonel, a recipient of the prestigious Jefferson Davis Historical Gold Medal, and the author and editor of nearly 100 educationally enlightening books (currently). Described by his readers as "game changers" and "life-altering," his voluminous writings have introduced hundreds of thousands to vital facts that have been left out of our mainstream books. A 7th generation Kentuckian of Appalachian heritage and the 6th great-grandson of the Earl of Oxford, Col. Seabrook has a 45-year background in American and Southern history, and is the author of the international blockbuster Everything You Were Taught About the Civil War is Wrong, Ask a Southerner