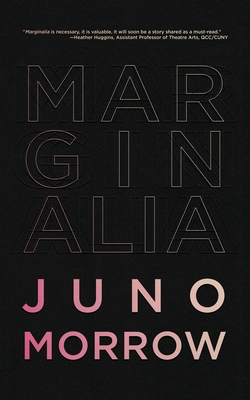 Constructed of words, artwork, photos and personal artifacts, Marginalia is an intimate and unconventional account of what it means to be a hybrid. It seamlessly interweaves experience with elements of sociology and psychology, exploring how one cultivates an identity containing multitudes - queer, trans, mixed-race, other.

"Morrow's work speaks to anyone who has felt themselves to be other - which in today's world, in one form or another, is nearly everyone. A common thread of alienation runs through her various platforms, including her first book, "Marginalia.""

"Marginalia may be one person's search for identity and understanding, but it is applicable to so many people who struggle with figuring out their identity, whether it is as an LGBTQ+ individual, a person of color, or someone who is both. Morrow's succinct style and creative eye for book design makes it highly recommended for readers of modern queer memoirs."

"There is a push and pull as Juno searches for the identity that fits both in accordance with herself and the way society perceives her. In the end, she embraces the idea that "we shouldn't be afraid to claim multitudes." Life is often complex and messy, so why should we be any different? Marginalia is a call to be unafraid of your journey to self-discovery and a powerful first-person account of someone who finds themselves in the margins of our society. These are the stories we need right now, and I hope to see many more, especially from Juno Morrow."

﻿﻿Juno Morrow is a multidisciplinary artist, independent game designer, photographer and educator living in Brooklyn, New York. She is an Assistant Professor of Game Design and Unit Coordinator at the City University of New York's Eugenio Mar a de Hostos Community College. At Hostos, she has been developing the game design program, the first public degree program of its kind in New York City, since 2015. Prior to that, Morrow earned an MFA in Design and Technology from Parsons School of Design. As an internationally exhibiting artist and designer, Morrow has presented games and spoken at sites such as SXSW, GDC, MAGFest and the Smithsonian American Art Museum. With over 10 years of experience as an award-winning photographer, she's had work featured in The Guardian, Dwell magazine and released 3 monographs of urban photography. Her unusual games, often infused with dark humor, feature distinctive aesthetics and novel premises. Examples include Oral Perspectives, a VR game taking place inside the player's mouth, and Mastering Tedium, an existentialist laundry simulator played inside a text terminal. Recent work includes Pruuds vs. Sloots, a "dumb versus game," and Blood Broker, a consent-based human sacrifice management simulator. junomorrow.com