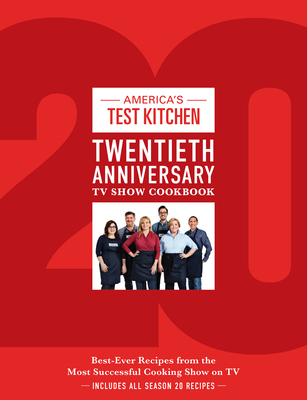 
Not On Our Shelves—Ships in 1-5 Days
A special collection of the very best 500 recipes from two decades of the America's Test Kitchen TV show, plus all the recipes from the 20th season. Here are ATK's greatest hits, the most inventive and rewarding project recipes, classics reimagined, must-have basics, international favorites, and all-star baking recipes.

The recipes selected for this commemorative edition celebrate the best and most remarkable accomplishments from 500 episodes of the longest-running cooking show on TV. The collection also shines a spotlight on the cast with fascinating commentary on the recipes from the team that brought them to life on TV. The book captures the personality of the show and provides a first-ever behind-the-scenes look at its beloved cast members along with special features that relay the collected expertise, wit, and wisdom of the team behind America's most-trusted test kitchen.
America’s Test Kitchen is well-known for its top-rated television shows with more than 4 million weekly public television viewers, bestselling cookbooks, magazines, websites, and cooking school. The highly reputable and recognizable brands of America’s Test Kitchen, Cook’s Illustrated, and Cook’s Country are the work of over 60 passionate chefs based in Boston, Massachusetts, who put ingredients, cookware, equipment, and recipes through objective, rigorous testing to identify the very best. Discover, learn, and expand your cooking repertoire with Julia Collin Davison, Bridget Lancaster, Jack Bishop, Dan Souza, Lisa McManus, Tucker Shaw, Bryan Roof, and our fabulous team of test cooks!