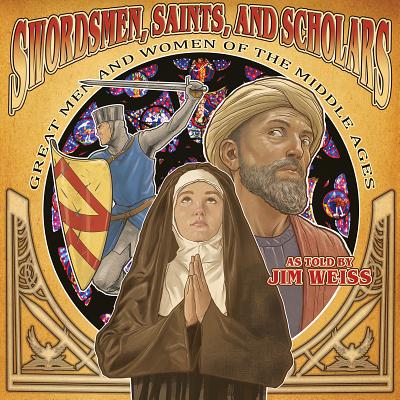 By Jim Weiss, Jeff West (Cover design or artwork by)

In this audiobook, master storyteller Jim Weiss introduces young listeners to some of the most fascinating people and events of the Middle Ages.

Attila the Hun makes an empire shake with fear. Sir William Marshall outfights every opponent–yet shows mercy even to his enemies. Hildegard of Bingen writes beautiful music–and writes advice letters to kings and queens! Muhammad changes the map of the world, and inspires a faith that guides millions of people. Eleanor of Aquitaine fights for power in a world ruled by men. Moses Maimonides heals illnesses of the body and the spirit. The scholars of Baghdad create an enormous library filled with the world’s books, while the cathedral-builders of Chartres shape stone and glass into a creation of stunning beauty.

Master storyteller Jim Weiss brings to life the people of the Middle Ages–Jews, Christians, and Muslims–in these mini-biographies that will entertain and educate children and parents alike.

Jeff West is an established illustrator and his variety and bulk of work is expansive, ranging from traditional art to art for TV and movies. He recently earned himself an Emmy nomination and has worked on blockbuster shows and films. He resides in Arizona.