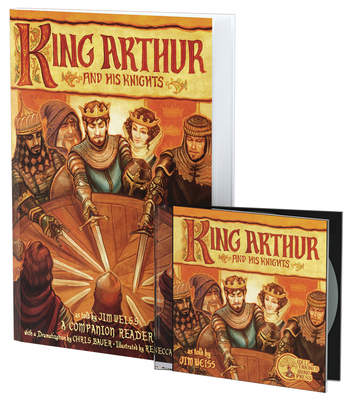 This is book number 72 in the The Jim Weiss Audio Collection series.

In a time of fear and danger, will Merlin’s magic, Lancelot’s bravery, and Arthur’s wisdom be enough to unite the kingdom and bring peace?

In this bundle (illustrated book and CD audiobook), beloved storyteller Jim Weiss brings tales of King Arthur and his Knights of the Round Table to life with action, wonder, and humor.

Gorgeous paintings and whimsical medieval style illuminated illustrations by Rebecca Sorge will fascinate and delight young readers. This beautifully illustrated Companion Reader is an exact transcript of the award-winning storytelling performance, available in audio CD from Well-Trained Mind Press. The Reader can be enjoyed on its own or used along with the recorded performance to build strong language skills. It also includes instructions for casting, preparing, and staging a play of King Arthur’s adventures, along with a full script.

Listen to the Jim Weiss stories on the CD, read along in the book to improve fluency, vocabulary, and grammar, and then speak great words and sentences out loud by practicing and performing the play based on the stories. Jim’s entertaining and literate audio tales make long car rides and rainy days a joy rather than a trial and introduce children to the great stories and sophisticated language of the world’s classics.