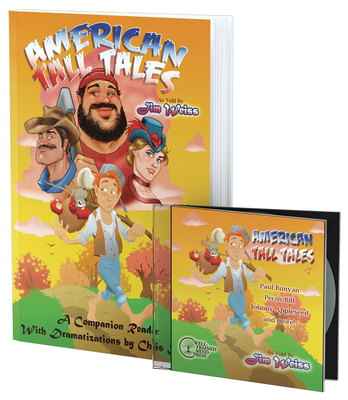 This is book number 73 in the The Jim Weiss Audio Collection series.

Ride across Texas on a mountain lion with Pecos Bill; work up a giant appetite with the mighty lumberjack Paul Bunyan; spread happiness with Johnny Appleseed; and confront the Fastest Draw in the West. Read and listen to these wild tales–and then act them out yourself!

Save when you get the audio and illustrated text together--this beautifully illustrated Companion Reader is an exact transcript of Jim Weiss’s award-winning storytelling performance of three classic American stories and one original tall tale.

The Reader can be enjoyed on its own, or used along with the recorded performance to build strong language skills. Listen to the Jim Weiss stories, read along in the book to improve fluency, vocabulary, and grammar, and then speak great words and sentences out loud by practicing and performing the short, accessible dramatic versions of Jim’s performances (including a stage play, a puppet show, and a dramatic monologue).

Jim’s entertaining and literate audio tales make long car rides and rainy days a joy rather than a trial and introduce children to the great stories and sophisticated language of the world’s classics.