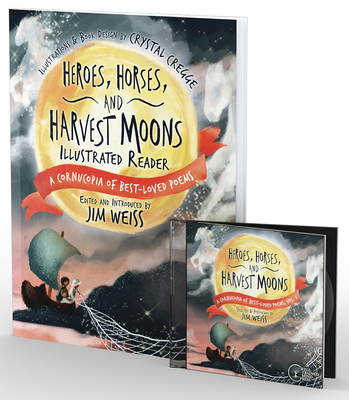 This is book number 74 in the The Jim Weiss Audio Collection series.

Classic poems about nature, bravery, love, and the wild journeys of the imagination, performed by Jim Weiss and beautifully illustrated by Crystal Cregge. This Bundle includes the illustrated paperback book and the audio CD.

Includes poems by Robert Frost, Tennyson, Emily Dickinson, and many more! Also contains a brief, child-friendly introduction to each poet. Favorites such as “The Midnight Ride of Paul Revere” and “Casey at the Bat” are here, as well as overlooked gems like “The Pobble Who Has No Toes” and A.A. Milne’s “The King’s Breakfast.” Even struggling readers can experience the beauty of classic language by following along in the text and enjoying the gorgeous color paintings of central scenes as Jim Weiss reads.

This illustrated book and Jim Weiss’s audio version make the perfect combination: kids learn language and vocabulary when they follow along with the text and illustrations while listening to the audio performance.

Jim’s entertaining and literate audio tales make long car rides and rainy days a joy rather than a trial, and introduce children to the great stories and sophisticated language of the world’s classics.

Crystal Cregge is a Graphic Designer, Illustrator, and Animator who graduated with a Bachelors of Fine Arts from Virginia Commonwealth University. She originally grew up with dreams of being a comic book artist but found her love of telling stories through imagery could be expressed in many mediums. Her work has ranged from children’s books, audiobooks, commercials, tv shows, magazines and postcards and even Virtual Reality. No matter the medium, she has worked with many notable clients to help bring their ideas to life.

In the rare moment when she isn’t making art, she can be found curled up with a good book and a great cup of coffee.