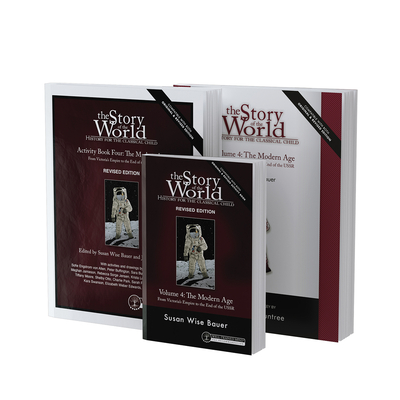 Spend an entire year investigating the fascinating story of the modern world, from the American Civil War through the end of the twentieth century--from Europe and the Middle East through India, China, the Arabian Peninsula, Australia, and both North and South America!

This bundle offers the essentials that parents and instructors need for a full year of history, geography, and literature study.

The Revised Edition paperback text provides the full, engaging narrative of world history, covering the century and a half from the end of the Civil War through the end of the twentieth century.

The Test Book & Answer Key offers a simple, clear way to measure student comprehension. Together, these three books provide a quality year of social studies and language arts for students in grades 4-8.

Susan Wise Bauer is a writer, educator, and historian. Her previous books include the Writing With Ease, Writing With Skill, and Story of the World series from Well-Trained Mind Press, as well as The Well-Trained Mind: A Guide to Classical Education at Home, The Well-Educated Mind: A Guide to the Classical Education You Never Had, Rethinking School, The Story of Western Science: From the Writings of Aristotle to the Big Bang Theory, and the History of the World series, all from W. W. W. Norton. She has a Ph.D. in American Studies from the College of William & Mary in Virginia, as well as an M.A. in seventeenth-century literature and a Master of Divinity in Ancient Near Eastern Languages and Literature. For fifteen years, she taught literature and composition at the College of William and Mary.

Jeff West is an established illustrator and his variety and bulk of work is expansive, ranging from traditional art to art for TV and movies. He recently earned himself an Emmy nomination and has worked on blockbuster shows and films. He resides in Arizona.