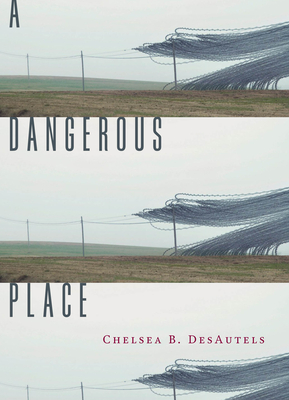 By Chelsea B. Desautels

Early in her powerful, affecting debut, Desautels writes: "I always mention gratitude because/people like that ending." Unflinching in its candor, this is the story of a woman with two swellings in her belly: a nascent baby, and a cancerous tumor. The poet could focus on the particulars of the medical case, using language from a traditional illness narrative. Instead she gives us the basics, then gathers up surprising and expansive material from various landscapes--the Black Hills, the prairies of Texas, the mountains, switchgrass, and, especially, the neighboring buffalo, to which she feels a profound connection. Desautels' metaphors strike home; they are counterpoints, balm to the uncertainty and grief that make us uncomfortable. The book moves elegantly from its dark beginnings to a transcendent thankfulness. With healing lyricism, she writes: "And I imagine the white sheets as heron wings./And the whirring machines are white eggs./And the worried voices are sunlight on water."

Chelsea B. DesAutels is a poet and educator living in Minneapolis. Her work appears in Ploughshares, Copper Nickel, Missouri Review, The Adroit Journal, Massachusetts Review, Willow Springs, Pleiades, Ninth Letter, and elsewhere. A National Poetry Series finalist, Chelsea earned her MFA from the University of Houston, where she was the recipient of the Inprint Verlaine Prize in Poetry and served as Poetry Editor of Gulf Coast. She has received support from the Anderson Center at Tower View, Vermont Studio Center, Minnesota Northwoods Writers' Conference, Community of Writers at Squaw Valley, and others. Some of the many places Chelsea has called home include South Dakota, New York, Minnesota, and Texas. In addition to her MFA, Chelsea also holds degrees from Wellesley College and the University of Minnesota Law School.