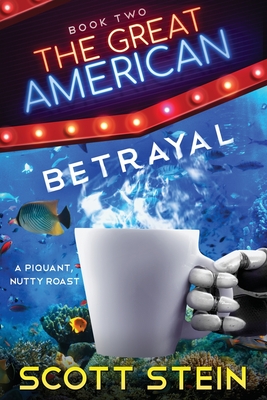 This is book number 2 in the Great American series.

Another metric ton of coffee...

Someone is trying to blackmail one of The Great American's biggest influenceleb, and Frank Harken-private investigator-along with his trusty coffeebot, Arjay, will stop at nothing to get to the bottom of it(1)(2).

As they follow the clues, the two are pulled deeper and deeper into the giant mall's secret machinations, and with every twist and turn the case provides, it becomes clearer that there's a sinister force looming over the Great American, one that has no qualms about using-and disposing-of anyone and anything to accomplish its goals.

By the end of it all, only one thing will be for certain: Harken could really, really use a cup of coffee.

The Great American Betrayal is the sci-fi comedy satire sequel to The Great American Deception which Publishers Weekly (starred review, PW Picks) said, "Sure to appeal to fans of Douglas Adams, this zany, uproarious mystery is a constant delight."

(1) Except for dogs. Arjay loves dogs.