Time Between: My Life as a Byrd, Burrito Brother, and Beyond (Paperback) 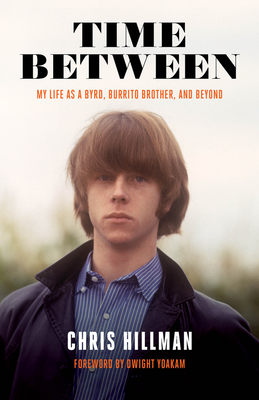 Time Between: My Life as a Byrd, Burrito Brother, and Beyond (Paperback)


Not On Our Shelves—Ships in 1-5 Days
As a co-founder of The Byrds and The Flying Burrito Brothers, Chris Hillman is arguably the primary architect of what's come to be known as country rock. He went on to record and perform in various configurations, including as a member of Stephen Stills's Manassas and as a co-founder of The Souther-Hillman-Furay Band. In the 1980s he formed The Desert Rose Band, scoring eight Top 10 Billboard country hits. He's released a number of solo efforts, including 2017's highly acclaimed Bidin' My Time—the final album produced by the late Tom Petty. In Time Between, Hillman shares his quintessentially Southern Californian experience, from an idyllic, rural 1950s childhood; to achieving worldwide fame thanks to hits such as "Mr. Tambourine Man," "Turn! Turn! Turn!" and "Eight Miles High"; to becoming the first musician to move to Laurel Canyon. Featuring behind-the-scenes insights on his time in The Byrds, his productive but sometimes complicated relationship with Gram Parsons, his role in launching the careers of Buffalo Springfield and Emmylou Harris, and the ups and downs of life in various bands, music is only part of his story. Within the pages of Time Between, Hillman reveals the details of his personal life with candor and vulnerability, writing honestly about the shocking tragedy that struck his family when he was a teenager, his subsequent struggles with anger, and how his spiritual journey led him to a place of deep faith that allowed him to extend forgiveness and experience wholeness. Chris Hillman is much more than a rock star. He is truly a founding father of American music and a man who has faced down the challenges of life to discover what really matters.
Rock & Roll Hall of Famer Chris Hillman is a founding member of The Byrds, The Flying Burrito Brothers, Manassas, and The Desert Rose Band. He is, as Tom Petty once wrote, "the man who invented country rock." Dwight Yoakam is a multi-Grammy-winning singer-songwriter, musician, and actor who has earned over a dozen Top 10 singles and sold over 25 million records.
"Chris was a true innovator—the man who invented country rock. Every time the Eagles board their private jet Chris at least paid for the fuel.” —Tom Petty

“THIS IS A GREAT JOURNEY INTO THE MAGIC AND MADNESS OF THE TIME. . . . [A] REMARKABLE BOOK.” —American Songwriter


"A CLEAREYED, EVENHANDED TALE FROM A PIVOTAL FIGURE IN THE DEVELOPMENT OF COUNTRY ROCK." —Kirkus Reviews


“This book brought back a lot of great memories: the humorous origins of The Byrds and subsequent adventures.” —Roger McGuinn


“Time Between is a thankful and engaging account of an extraordinary life, an insider’s view of the pop culture explosion.” —UNCUT

“Chris Hillman [is] the unvarnished gem of every band he has inhabited. IT’S TIME TO APPLAUD HIS LEGACY.” —Bernie Taupin