Colloquy at the Abyss: A Fugitive Amalgam (Paperback) 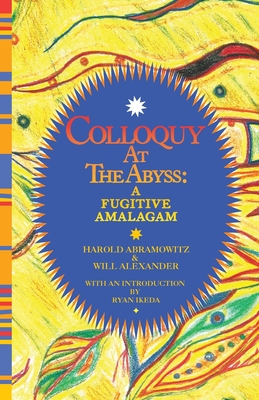 Colloquy at the Abyss: A Fugitive Amalgam (Paperback)

By Harold Abramowitz, Alexander Will, Ikeda Ryan (Introduction by)

"What you now hold was once a conversation between Harold Abramowitz and Will Alexander, recorded at a coffee shop somewhere in Los Angeles, and then transcribed by several listeners at various locations across the country. This book is not a book but a mediation of those sense experiences-as sound was separated from bodies and then concretized into text."

"Some have described translation as an act of necessary betrayal (traduttore, traditore) in which the translator must deviate from literal translation to convey the poetic moments embodied in the original tongue. For transcription, the language stays the same, but its medium changes; the shift from audio to writing affects an aesthetic re-rendering of the sense experience associated with Will and Harold's project, and changes its audience from listeners into readers. Transcription betrays the original in yet another aspect, it marks an objectification of the material substance of the project, now a book. As an object, sound becomes palpable-property not of the ears, but of the hands and the eyes. Colloquy at The Abyss seeks to defamiliarize sense experience in order to question the way we listen and the way public life and personal experience continuously intermingle."