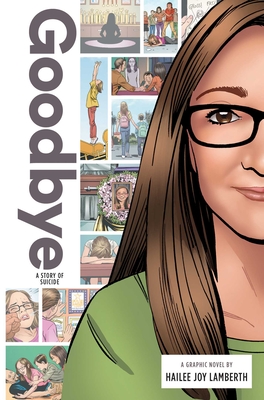 
Special Order—Subject to Availability
The death of a child is a tragedy. When the cause is suicide, the tragedy is compounded. It’s not easy to read about, or talk about, and yet it is so crucial that young adults who feel the world closing in know that ending their lives is not the answer. There are people who can help. There are people who care.

A thirteen year old should be enjoying life, planning her future, anticipating the joys to come. Instead, and sadly for all who knew her, Hailee Joy Lamberth, chose a permanent solution to a temporary problem.

Hailee was an A student, bubbling with enthusiasm and love for life. She danced, wrote poems, and attended classes for gifted students. She loved playing with her little brother, Jacob. They’d play hide and seek and she’d always hide in the same place so that Jacob would find her.

But her favorite interaction with Jacob was when they rode the Ferris wheel together and got stuck at the top. Jacob was afraid, but Hailee reassured him. “We’re practically in heaven,” she tells him. “Well if we die,” Jacob says, “At least we’ll be together.”

When she was twelve years old, the bullying began.

First it was a boy in math class who seemed to have a crush on her. When she rebuffed him, he started sending her mean notes, calling her names, and spreading rumors about her.

Then it was a girl in P.E. who would crash into her when no one was looking.

Hailee tried to avoid the bullies. She decided to drop out of the math class. She made excuses to her parents in order to escape, and her parents believed her. They didn’t know that her life was becoming unbearable.

By the end of the school year, Hailee had begun to cut herself. It was her way of coping with the constant degradation. She overachieved in school in order to keep her parents from asking too many questions. A kid who is bullied often becomes an expert liar.

In seventh grade, the bullying increased, growing like a cancer. Hailee kept up appearances to protect her parents and brother, but inside she was suffering. Two days after her thirteenth birthday, she succumbed to the pain.

Hailee’s parents have decided to not allow her death to be in vain. By working with Zuiker Press to tell Hailee’s story as if she were able to tell it herself, they hope reach out to other young people in crisis, and show them that they do have options -- and to prevent them from bringing the excruciating pain of suicide to their families.

Their hope is that by sharing Hailee’s story, they may prevent another young person from making a fatal choice.

Goodbye: A Story of Suicide is the eighth in a series of graphic novels written by young adults for their peers.
Hailee Joy Lamberth was a native of Las Vegas, Nevada. She took her own life two days after her thirteenth birthday. She is survived by her mother, Jennifer, and father, Jason, and her younger brother, Jacob. Hailee enjoyed mathematics, playing goalie for her youth league soccer team, and was proud to be the only student who “aced” her proficiency exams. Hailee had also aspired to be in the military, become a school teacher, and be a mother.

Illustrator Don Hudson has been a professional artist in Los Angeles for twenty years. He's had the opportunity to work in comics, animation, Advertising and even Broadway! If you want to know more about Don, go to www.dchudson.blogspot.com.

Colorist Monica Kubina is a digital artist and comic book colorist. She has worked with a number of publishers throughout her career, including DC Comics, Marvel, Warner Bros., Dark Horse Comics and IDW Publishing. She has colored hundreds of issues of some of the most popular comic books such as the Justice League, the X-Men, Spider-Man, SpongeBob, Star Wars and currently the DC Super Hero Girls.