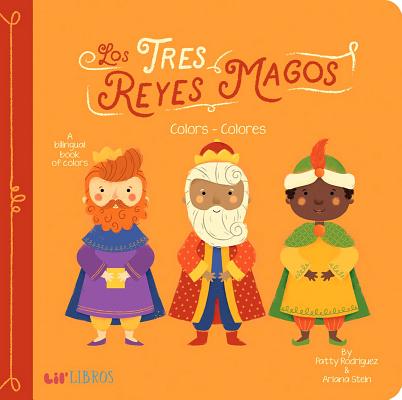 Introducing Spanish/English bilingualism, Lil' Libros encourage parents to read to their children at the earliest age--focusing on subjects they are familiar with, while making it fun and rewarding for both parent and child.

Let's celebrate the night when the Three Wise Men following the star to Bethlehem arrived with treasured gifts for Baby Jesus. Melchior, Caspar, and Balthazar brought with them gifts of gold, frankincense, and myrrh. Gold represented Baby Jesus' royal standing, frankincense his divine birth, and myrrh his mortality.

Inspired by their magical journey, this book introduces little ones to beautiful bright colors and their first English and Spanish words. Your child will travel with pink camels through the high desert, and follow the many estrellas amarillas to their destination.

Unable to find bilingual first concept books she could enjoy reading to her baby, Patty Rodriguez came up with the idea behind Lil' Libros. Patty and her work have been featured in the Los Angeles Times, Rolling Stone, CNN Latino, Latina Magazine, Cosmopolitan, People En Espanol, Cosmo Latina, and American Latino TV, to name a few. She is currently Sr. Producer for On Air With Ryan SeacrestiHeartMedia, jewelry designer for MALA by Patty Rodriguez, and creator of Manolos And Tacos.

Ariana Stein, a graduate from California State University, Dominguez Hills, has a Bachelor's Degree in Business Administration. Ariana spent the first eight years of her professional career in the corporate world. Her life changed with the birth of her baby boy. She immediately realized that bilingualism played a very important role in his future, as well as the future of other children.