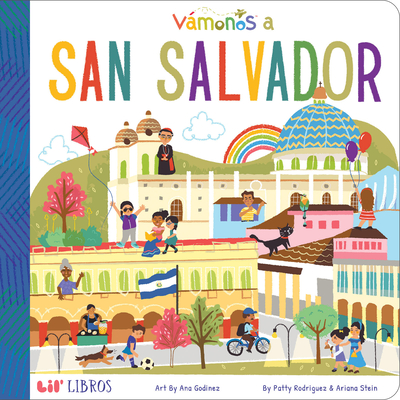 Teach your baby about San Salvador, the capital of El Salvador, through illustrations and words that will teach them about the world in English and Spanish.

Let's take a trip around the world with V MONOS. In this colorful new series by Lil' Libros, each book celebrates the sights, sounds, and people of a different city both in English and Spanish.

Through charming illustrations, you and your child will travel to San Salvador, the capital of El Salvador, and hike up to nature's giant, the Boquer n volcano. Discover with your children what makes each city fantastic and special.

With simple text by Patty Rodriguez and Ariana Stein, and colorful illustrations by Lil' Libros' very own Ana Godinez, each book will have your little ones celebrating the world, fostering empathy, and seeing that there are a million ways to live on this planet

Patty Rodriguez is the co-founder of Lil' Libros, a publisher of bilingual children's books and co-author of more than 15 books celebrating the Latino-American experience in this country. Her work has been featured in the New York Times, Washington Post, Time, and Rolling Stone magazine. She's received numerous awards for her commitment in elevating Latino-American voices, including LA Times' Cultural Influencer Award. You can also listen to Patty every morning in Los Angeles on the On Air with Ryan Seacrest nationally syndicated radio show. She lives in Los Angeles, California, with her two boys, Alexander and Oliver. Visit her on Instagram @pattyrodriguez.

Ariana Stein is the co-founder of Lil' Libros, a Los Angeles-based publisher that celebrates bilingualism and Latin American culture. Since 2014, she has co-authored a variety of first concept children's books. Recognizing the bilingual gap and diversity void in children's literature, she became passionate for bilingual education and multicultural books. In 2016, she left her corporate job to focus on Lil' Libros. She has been featured in the Los Angeles Times, Forbes, CNN, KTLA, and more. When she's not working, you can find her frequenting her local favorite seafood and taco spots, reading, running, and having in-home jiu-jitsu competitions with her son, Ethan, and husband, Nick. You can find her on Instagram @ariana_stein.

Ana Godinez is a graduate of the University of Southern California where she studied English Literature and Fine Arts. She lends her artistic hand as graphic designer for several companies and organizations in Los Angeles, working to create projects that include branding, websites, social media campaigns, murals, and commissioned abstract paintings. Today, Ana is the Creative Director of Akash Winery & Vineyard and Lead Designer at Lil' Libros. Her newest and most challenging project is tackling the illustrations of V monos, a new travel series by Lil' Libros that takes readers on a ride through the sights and sounds of Latin American. When Ana is not glued to her computer, she's out looking for inspiration through traveling, walking her dog, and looking for food. You can see her latest adventures on instagram @anaeats.