Cooking for Wizards, Warriors and Dragons: 125 unofficial recipes inspired by The Witcher, Game of Thrones, The Broken Earth and other fantasy favorites (Hardcover) 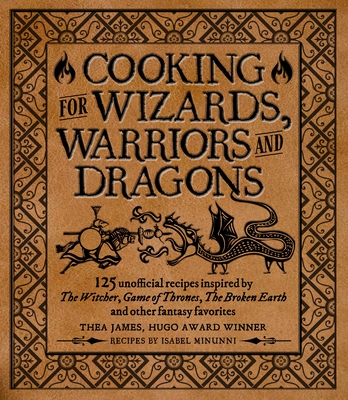 Cooking for Wizards, Warriors and Dragons: 125 unofficial recipes inspired by The Witcher, Game of Thrones, The Broken Earth and other fantasy favorites (Hardcover)

100+ Spell-Binding Recipes Inspired by Diverse Fantasy Worlds, from The Witcher to The Broken Earth

Fortify yourself for the road with classic dishes, such as Pernese Meatrolls or Geralt's Life Saving Chicken Sando. Embrace your dark side with King's Landing Barbecue smoked meats a la Daenerys, channel your inner Saruman with Charred Broccoli Stalk Salad, or a Fifth Season-inspired Solving the Meat Shortage Osso Bucco. Learn to make your own Grishaverse-inspired Butter Week Cakes or Orïshan Coconut Pie, and try your hand at a Spiritwalkerverse-inspired Lamb Tajine.

Organized by different meal types and ingredients (including Breakfasts & Second Breakfasts, Soups & Stews, The Hunt, The Farm, The Catch, Snacks & Sides, and Desserts), Cooking for Wizards, Warriors and Dragons includes illustrations from noted artist Tim Foley and recipes developed and tested by professional chef Isabel Minunni. With five bonus feast spreads, this grimoire is sure to sate hungry readers from any realm.

Thea James is the author of Cooking for Wizards, Warriors and Dragons and editor and Hugo Award-winning co-founder of The Book Smugglers (a science fiction and fantasy book review blog). A hapa (half) filipina-american who was born in Hawaii and grew up in Indonesia and Japan before moving to the United States, Thea is a passionate advocate for the importance of diverse voices in SFF. She is a full-time book nerd who works in publishing and currently resides in Astoria, Queens with her partner and rambunctious cat.

Isabel Minunni is a cook, recipe developer and food writer. She created the popular food blog Bella’s Banquet (bellasbanquet.com), and has won numerous food and baking competitions, including being named 2014’s “Best Italian Chef” by Chef Jeff Mann and Maggiano’s Little Italy restaurant chain. One of her favorite cookie recipes was selected from among 4,000 entries for inclusion in The Barnes & Noble Cookie Bake-Off. Her numerous TV appearances include both Today and Live with Kelly & Michael.

Tim Foley was born in Flint, Michigan, and since attending college at the Kendall School of Design, has made his home in Grand Rapids on the west side of the state. A freelance illustrator for the past three decades, his work has appeared in magazines and newspapers around the world and books have included many titles in the bestselling young adult "Who Was" biography series, as well as several adult coloring books.

"Happiness is a beautiful intersection between good food and good books, and Thea's culinary offering hits the spot with both! Prepare for a feast!"
–Rin Chupeco, author of the The Bone Witch trilogy

“This is a compilation of recipes from some of our favorite fantasy worlds that we’ve all been dying to try. This means small snacks for your epic journeys or massive meals to share with your companions. A lot of these recipes are things we’ve only dreamed of trying!... Most recipes are fairly straightforward and don’t require a lot of fancy techniques to get the fantastical effect you’re going for.This is truly a masterpiece of a cookbook!”
—Cookbook Divas

"A great cookbook that can bring a delicious element of fun to mealtimes with a bunch of diverse fantasy-inspired foods."
—Twin Cities Geek

"The designers behind this book really should win some sort of prize. A beautiful and thoughtful book."
—The Starving Artist