May Cause Side Effects: A Memoir (Hardcover) 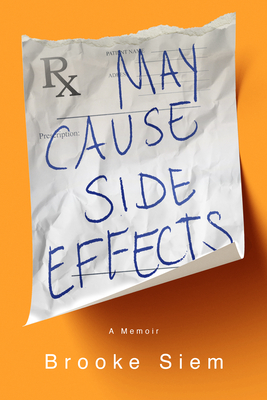 May Cause Side Effects: A Memoir (Hardcover)

An unforgettable memoir about the turmoil of antidepressant withdrawal and the work it takes to unravel the stories we tell ourselves to rationalize our suffering--all unfurled against a global backdrop.

Brooke Siem was among the first generation of teens to be prescribed antidepressants. Initially treated at fifteen years old, she swallowed the capsules each morning with no thought of why or how she might stop the prescriptions down the road.

May Cause Side Effects is the gripping story of what happened when, after fifteen years and 32,760 pills, Siem was forced into harrowing antidepressant withdrawal when an opportunity to travel around the world dropped into her lap.

An illuminating memoir for those who take, prescribe, or are considering psychiatric drugs to blunt the pain and experiences that shape our reality, May Cause Side Effects is an honest reminder that, for so many, the road to true healing and happiness is found not on a prescription pad but in the deep self-work that pushes us to the edges of who we are.

Brooke Siem is a writer and award-winning chef whose work and story has appeared in the Washington Post, Psychology Today, EatingWell magazine, and more. She is a Food Network Chopped Champion and was named one of Zagat's 30 Under 30. She is also the creator of "Happiness is a Skill," a newsletter devoted to antidepressant withdrawal education, safe de-prescribing, and the practice of creating happiness. When she's not writing or cooking, she can be found in Nevada, lounging in the desert sun with her rescue mutt, Bellaroo. Say hi at www.brookesiem.com, @brookesiem