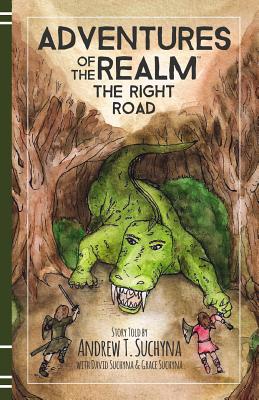 A rollicking medieval action-adventure novel about two brothers who must face the dark Wilderness together. The first book of the Adventures of the Realm series.

Since last year when the knights of the North Realm drove out the dinosaurs, Sir Andrew has hidden a secret he'd rather forget. He now lives in fear of the return of the dinosaur king.

One night, a wounded crusader from the Holy Land appears on Andrew's doorstep. Andrew would like nothing more than to deliver the crusader's message and retreat back to his castle. Instead, he and his brother David find themselves the culprits of a grievous crime: damaging the glorious chin of Sir Chadwick the Chinmaster. Andrew and David flee into the Wilderness in shame, not knowing what strange fate awaits them or whether they shall ever return. There, they are called on a quest to help Robin Hood himself. But this they flee too. They are about to find out that monsters are born from running.

The beginning of a wildly entertaining epic for advanced middle grade readers, full of eccentric humor and read-aloud potential. Will be loved by fans of Robin Hood and Camelot.