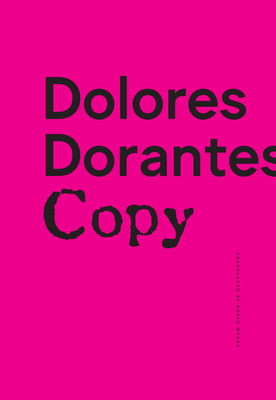 Without the copying process, the poet Dolores Dorantes has said, there would be no life, no reality. Through deconstructed dictionary entries and powerfully syncopated, recursive texts, Copy is a prose poem sequence that insinuates an experience of violent removal: a person's disappearance from a country, from normal life, and forcible reintegration into a new social and existential configuration. This displaced, dispossessed voice explores what it means to be extracted, subtracted, abstracted out of being--and returned into it. Meditative, urgent, and alive, Copy asserts itself as an invocation, both intensely personal and insistently communal, of the right to refuge, and it enacts a powerful homage to the human capacity for creation and metamorphosis. In this way, this book points to the wound of being extricated, serving as both a suture and a salve.

Dolores Dorantes is an Acharya in the Buddhist tradition, a journalist, writer, therapist, poet, performer, and sacred animal. She is a Mexican born in the mountains of Veracruz in 1973 but raised in Ciudad Juarez, in El Paso, which is just across the US border. In 2011, she fled her country and was granted political asylum in Los Angeles. Dorantes is Black and Nahua indigenous on her mother's side, Spaniard and mestiza on her father's side. Recent books translated into English are The River, a collaboration with the artist Zoe Leonard, and Style. Her socio-cultural writings and political-social reflections, along with the majority of her books, are part of the commons at www.doloresdorantes.blogspot.com. She believes in a United Latin America. Robin Myers is a translator and poet. Recent and forthcoming translations include Another Life by Daniel Lipara (Eulalia Books), The Science of Departures by Adalber Salas Hernandez (Kenning Editions), Cars on Fire by Monica Ramon Rios (Open Letter Books), The Restless Dead by Cristina Rivera Garza (Vanderbilt University Press), and Animals at the End of the World by Gloria Susana Esquivel (University of Texas Press). She writes a monthly column for Palette Poetry and lives in Mexico City.