Translation of the Lilies Back Into Lists (Paperback) 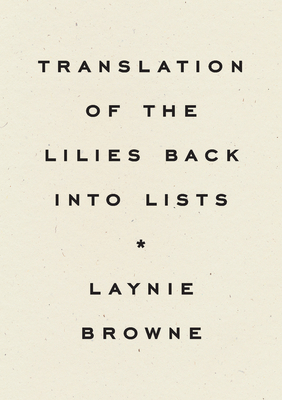 Translation of the Lilies Back Into Lists (Paperback)

Laynie Browne's latest poetry collection, Translation of the Lilies Back into Lists playfully employs the list poem and delivers poems which evade genre and subvert the quotidian material of daily life. These poems consider elegy, absence and bewilderment while allowing associative logic to make poetic leaps in imagination and mood that belie convention. This book explores the myriad ways one could attempt to categorize a lived experience with its dizzying infinitudes by marking it in finite language, and ultimately shows how poetry is an experiment for that translation Browne's exquisite collection considers language, time, and poetics in a way that is as electrifying as it is elusive. In homage to poet C.D. Wright, her title is inspired by Translations of the Gospel Back into Tongues.

Laynie Browne is a poet, prose writer, teacher and editor. She is author of fourteen collections of poems and four books of fiction. Recent publications include: a book of poems, In Garments Worn by Lindens, a novel, Periodic Companions, and a book of short fiction, The Book of Moments. Her work has appeared in journals such as Conjunctions, A Public Space, New American Writing, The Brooklyn Rail, and in anthologies including: The Ecopoetry Anthology (Trinity University Press), The Reality Street Book of Sonnets (Reality Street, UK), and Postmodern American Poetry: A Norton Anthology (W.W. Norton). Her poetry has been translated into French, Spanish, Chinese and Catalan. She co-edited the anthology I'll Drown My Book: Conceptual Writing by Women (Les Figues Press, 2013) and edited the anthology A Forest on Many Stems: Essays on The Poet's Novel (Nightboat, 2020). Honors and awards include a Pew Fellowship, the National Poetry Series Award for her collection The Scented Fox, and the Contemporary Poetry Series Award for her collection Drawing of a Swan Before Memory. She teaches at University of Pennsylvania and at Swarthmore College.