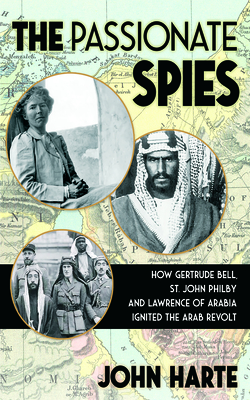 This is the true story of how three British Secret Service agents from the Arab Bureau in Cairo helped General Allenby defeat Germany's ally, the Turks, and end World War One. Lawrence of Arabia reignited a failing Arab Revolt by training and leading a guerrilla force of Arab irregulars to take the port of Aqaba on the Red Sea. John Harte's book - as well as focusing on a critical moment that David Lean featured in his famous film in which young Captain Lawrence discovers a secret back door into the Turkish interior - also describes the forgotten nomadic life of the Bedouin tribes and their raiding parties, the founding of oil-rich Saudi Arabia led by King Ibn Saud, and his double-agent, the treacherous Major St John Philby whom spymaster Major Gertrude Bell of the SIS had trained in spy-craft.